A lawsuit alleges a hull “defect” plaguing certain Sea-Doo personal watercrafts can cause the products to take on water and sink during the course of normal use.

A Florida resident alleges a hull “defect” plaguing certain Sea-Doo personal watercrafts can cause the products to take on water and sink during the course of normal use, leaving riders and passengers dangerously stranded in open water.

The 23-page proposed class action alleges the defendants—BRP US Inc., Bombardier Recreational Products Inc., BRP Inc. and Broward Motorsports of Ft. Lauderdale, LLC—have been aware of the issues plaguing Sea-Doo watercrafts yet have failed to inform owners and prospective buyers while continuing to assure that the products are safe. Aside from the injury risk posed by the apparent defect, repairs to Sea-Doo parts and damage caused by the intake of water can run into the thousands of dollars, according to the case.

“The Sea-Doos currently present a safety hazard and are unreasonably dangerous to consumers,” the complaint in Broward County court alleges. “When the Sea-Doos take on water due to the defects, this results in the partial or complete sinking of the Sea-Doos. Consequently, the passengers find themselves stranded in open water and at risk of personal injury or death.”

According to the complaint, the plaintiff bought in February 2018 a 2018 Sea-Doo RXT-X 300 from Broward Motorsports of Ft. Lauderdale for her son’s personal use. In mid-June 2020, the case says, the plaintiff’s son discovered while using the Sea-Doo that water would “seep into the hull and accumulate in the bilge, causing the Sea-Doo to partially sink.”

The complaint claims the plaintiff’s son in August 2020 took the Sea-Doo back to Broward Motorsports and found that the carbon seal that encircles the driveshaft as it comes out through the hull and into the pump, which is meant to provide the Sea-Doo with a waterproof seal, was defective. Per the suit, the plaintiff’s son was forced to buy a new carbon seal for around $90.

In September, the plaintiff’s son lent the Sea-Doo to his friend, who went for a ride with other friends on jet-skis, the case says. According to the lawsuit, the group, after spending much of the day anchored at the Haulover Sandbar in Miami Beach, decided to ride the jet-skis through outer coastal waters. The plaintiff’s son’s friend, who was riding the Sea-Doo at issue with his daughter in the back seat, allegedly encountered a problem as the group was getting close to the government-cut channel in Miami Beach. According to the lawsuit, the Sea-Doo suddenly shut off, and one of the rider’s friends approached and “noticed there was something wrong on the side of the Sea-Doo.”

Upon inspection, the friend saw that the Sea-Doo’s hull had exposed fiberglass and was missing paint, the lawsuit says. Further inspection revealed water was “coming inside the hull and that the Sea-Doo was starting to sink,” according to the case. The lawsuit relays that the group was able to tighten the Sea-Doo with ropes to another jet-ski and pull it into the Parrot Jungle Marina, after which it was visible that the bottom of the product was damaged: 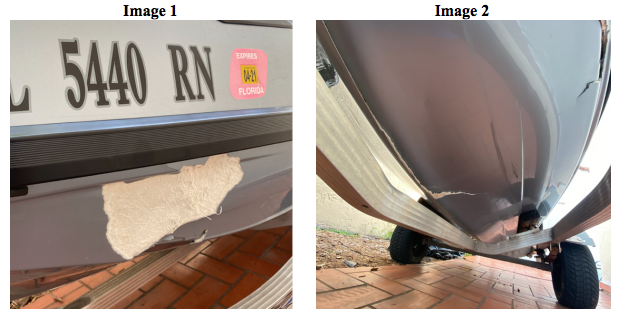 “On information and belief,” the suit says, “a defective hull caused the cracks on the body of the vessel, which in turn allowed water to flood the hull of the Sea-Doo.”

Prior to the plaintiff’s purchase of the Sea-Doo, the consumer was never informed that the product suffers from a defective carbon seal and/or hull, the complaint claims. Per the lawsuit, the plaintiff would not have bought the Sea-Doo had the alleged defects been properly disclosed.

The case goes on to say that consumer complaints with regard to the Sea-Doo hull/seal defect are not new, and represent the “Defendants’ refusal to take responsibility for the defects.” The lawsuit pins blame for the defect on a manufacturing process used by Bombardier since 2017 called CM-Tech, which replaced the traditional gel-coat process used in the industry for years.

“On information and belief, Bombardier’s new process for manufacturing the Sea-Doos’ hulls is defective and causes the Sea-Doos to stress crack, without even being ridden by consumers,” the case claims. “Mere temperature changes can trigger expansion or contraction stress to the hull layers, causing them to crack while idle.”

The lawsuit looks to represent anyone who purchased a Sea-Doo in Florida from 2017 through the present.