A California consumer claims the company behind cannabis subscription service Nugg Club has unlawfully sent automated text messages to her cell phone without obtaining prior express consent to do so.

The 16-page suit out of California alleges defendant Becc Holdings’ “aggressive unsolicited marketing” has not only harmed thousands of consumers but overstepped the Telephone Consumer Protection Act (TCPA), which prohibits entities from using automated technology to send non-emergency text messages without recipients’ permission.

The plaintiff says she’s received “numerous” text messages from Nugg Club within the past year, including the following messages received on May 18 and July 10, 2020: 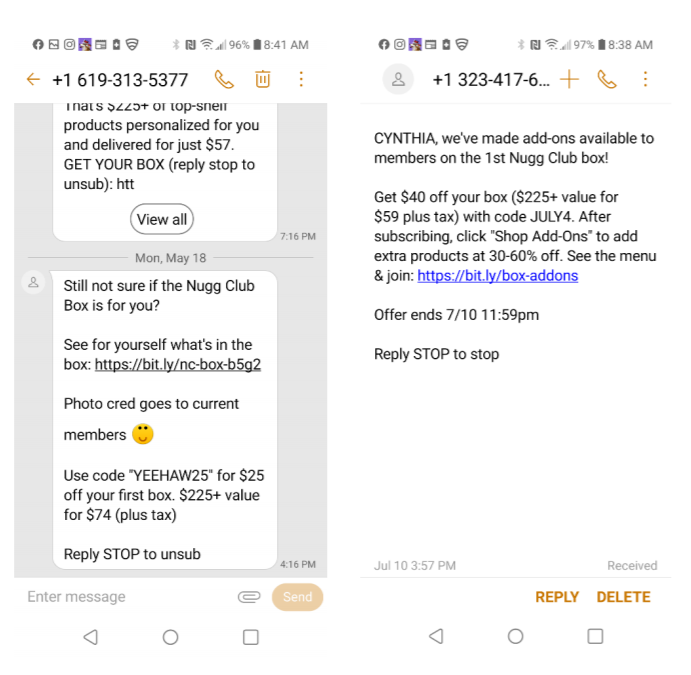 According to the lawsuit, the texts were sent using an automatic telephone dialing system (ATDS) given their “impersonal and generic nature.”

“Specifically, upon information and belief, Defendant utilized a combination of hardware and software systems to send the text messages at issue in this case,” the complaint reads. “The systems utilized by Defendant have the capacity to store telephone numbers using a random or sequential number generator, and to dial such numbers from a list without human intervention.”

Per the complaint, the plaintiff did not, at any point in time, provide prior express consent to be contacted using an ATDS for marketing purposes.

Nugg Club’s texts cause the consumer “actual harm,” including invasion of her privacy, aggravation, annoyance, intrusion on seclusion, trespass and conversion, not to mention an inconvenience and disruption of her daily life, the suit says.