Amplify Energy and a subsidiary face a class action over the early-October oil spill that has devastated a significant stretch of the Southern California coast. 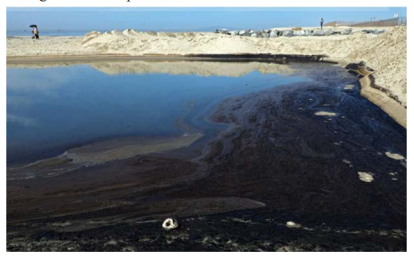 The 13-page suit stems from the breach of an oil rig, known as Elly and operated by Houston-based Amplify and Beta, and a connected nearly 18-mile pipeline that has caused at least 126,000 gallons of oil to be spilled in the areas of Huntington Beach and Newport Beach and the surrounding region, sparking what Huntington Beach Mayer Kim Carr has described as an “environmental catastrophe.”

“The damage that has resulted here is tremendous,” scathes the complaint, filed on October 4 in Los Angeles federal court.

The plaintiff in the case, the owner of a DJ company who frequently performs at events on the Huntington Beach beachfront, claims to have lost a “substantial amount of business” while the area remains closed. Moreover, the plaintiff, a local resident, alleges he has been or will be exposed to toxins as a result of the oil spill.

According to the lawsuit, wildlife in the area of the oil spill has been harmed significantly, and nearby residents have been alerted by local authorities about the potentially adverse health effects that may be linked to the event. The case charges that Amplify and Beta’s apparent failure to properly maintain the oil rig and pipeline has exposed the area’s environment, people and animals to “catastrophic” consequences.

“At the time of this complaint’s filing, deceased animals were washing up covered in oil on the shoreline of the Affected Area and a large ecological reserve nearby had suffered tremendous damage,” the lawsuit states. “Additionally, the Orange County healthcare agency released a statement to the citizens of the Affected Area about the deleterious effects of the oil spill to human health and safety.”

The lawsuit relays that the oil spill was first reported to the U.S. Coast Guard on the morning of October 2, 2021, though later reports suggest that the breach occurred sometime the night prior. Per the case, roughly 126,000 gallons of post-production crude oil leaked into an area covering about 8,320 acres, including a 25-acre ecological reserve called the Talbert Marsh that allegedly suffered “tremendous damage.”

At the time of this writing, it is believed 144,000 gallons were spilled into the area near Orange County coastline, stretching six nautical miles. According to media reports, the U.S. Coast Guard has said roughly 3,150 gallons of oil has been recovered from the water.

According to the suit, the Orange County Health Care Agency issued a health advisory to warn local residents to seek medical attention if they experienced any symptoms after being exposed to the oil contamination. The advisory noted that excessive exposure to oil or dispersants can cause skin, eye, nose and throat irritation; headache; dizziness; upset stomach; vomiting; and cough or shortness of breath, with the elderly, children and people who suffer from respiratory diseases at particular risk.

The plaintiff alleges proposed class members—i.e., people and businesses who have been harmed as a result of the October 1, 2021 Huntington Beach oil spill—have suffered extensive damages, including:

Among the relief sought through the case is medical monitoring for cancer and other illnesses associated with “exposure to oil and other chemicals, toxins, and particulates.” The lawsuit also seeks a declaratory judgment that the defendants are responsible for “past and future costs to remedy the harm” caused to those who the suit looks to cover.