A class action claims 2015-2019 model year Mercedes-Benz W205 vehicles suffer from a defect that can cause raw fuel to leak into the engine compartment.

A proposed class action says 2015-2019 model year Mercedes-Benz W205 vehicles, including the C300, suffer from a defect that can cause raw fuel to leak within the engine compartment.

The 82-page suit, filed in Georgia federal court, claims Mercedes-Benz USA, LLC and Daimler AG have had “longstanding knowledge” of the fuel leakage defect yet failed to disclose the potentially dangerous issue to consumers.

Affected Mercedes-Benz models are “predisposed” to fuel line leakage within their engine compartments, and the problem can create a dangerous situation wherein a vehicle’s occupants might inhale gasoline fumes, the suit says. Otherwise, the fuel leakage defect can cause a vehicle to stall or catch fire given its proximity to an ignition source, according to the case. More specifically, the lawsuit says the apparent defect plaguing 2015-2019 Mercedes models can cause gasoline to leak into the engine compartment, including onto the engine itself and/or a vehicle’s exhaust, from the car’s fuel line connections to the high-pressure fuel pump located at the rear of the engine compartment. Upon information and belief, the case reads, the leakage problem at an affected vehicle’s fuel line connection points is the result of defective fuel hoses, the use of incorrect manufacturing processes to affix the clamps to the hoses at the connection points as needed, or the use of improper materials. 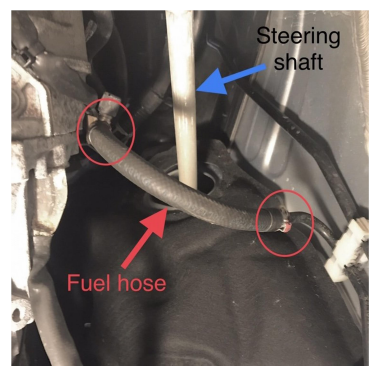 The lawsuit goes on to explain that as a Mercedes vehicle’s cabin air filter pulls air from the engine compartment into the cabin for use in heating and cooling, fuel fumes stemming from the defect are sucked into the space occupied by drivers and passengers, where they can be “detected and unavoidably inhaled.” Breathing even small amounts of gasoline vapor can cause nose and throat irritation, headaches, dizziness, nausea, vomiting, confusion and breathing troubles, the case relays.

The suit charges that Mercedes-Benz and Daimler have not only actively concealed the fact that certain vehicle models are plagued by a manufacturing defect and thus require pricey repairs, but failed to reveal to owners and lessees that the existence of the problem would diminish the intrinsic and resale value of their cars.

“Mercedes-Benz has long been aware of the Fuel Leak Defect,” the complaint says. “Despite its longstanding knowledge of this defect, Mercedes-Benz has been unable and/or unwilling to adequately repair the Class Vehicles when the Defect manifests.”

Although owners and lessees have communicated with the defendants to request that the fuel leakage problem be addressed at no expense, the automaker and its parent company have “failed and/or refused to do so,” the case claims, alleging drivers have instead been told their vehicle’s fuel system components cannot be repaired under warranty. For those whose vehicles are within Mercedes’ new vehicle 48-month/50,000-mile warranty or certified pre-owned warranty, the company “has done nothing to address or correct” the fuel leakage issue, according to the suit. Drivers whose repair-under-warranty requests have been denied have been forced to pay out-of-pocket to address the apparent defect, the lawsuit claims.

“As a result of the Fuel Leak Defect and the considerable monetary costs associated with attempting to repair such defect, Plaintiffs and Class members have suffered injury in fact, incurred damages, and have otherwise been harmed by Mercedes-Benz’s conduct,” the lawsuit alleges.

To date, Mercedes-Benz has not recalled affected 2015-2019 vehicles or offered drivers a suitable repair or replacement free of charge or reimbursement for repair expenses, the case says. Per the suit, the closest thing to remedy came around November 2018, when Daimler AG initiated a voluntary recall to replace certain fuel line hose clamps in model year 2016-2017 Mercedes-Benz Metris vans.

“Despite being made aware of the Defect through customer complaints, Mercedes-Benz continues to deny the existence of the Defect to Class Members, and also refuses to make the necessary cost-free repairs to correct the Defect,” the suit reiterates. “Instead, Mercedes-Benz continues to force Class Members to pay out-of-pocket to correct this dangerous safety hazard in the Class Vehicles.”