A proposed class action filed this week claims Apple’s Powerbeats Pro earbuds are plagued by a defective design that prevents the headphones from charging properly. According to the 16-page case, the earbuds’ failure to properly charge in their case causes the batteries to quickly drain and renders the product “unfit for use.”

Battery life, the suit says, is one of the most important considerations for consumers who buy wireless earbuds. The lawsuit claims that as a result of the charging defect, the Powerbeats Pro is unable to provide up to “9 hours of listening time” and “24 hours with charging case” as advertised by Apple. As a result, the Powerbeats Pro earbuds are worth much less than represented, the case alleges.

The lawsuit claims that if consumers had known about the alleged charging problems with the Powerbeats Pro, they would not have agreed to its premium $150.00 price tag or purchased the earbuds at all.

The proposed class action claims one reason the Powerbeats Pro earbuds fail to properly charge is their placement within the charging case. 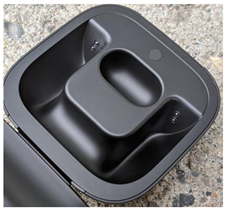 According to the complaint, when a user puts their earbuds into the case, the charge contact can easily disconnect even from slight movements such as transporting the case or not keeping it on a flat surface.

One possible cause for this, the lawsuit says, is the design of the ear “gasket” that inserts into a user’s ear. The case claims that if the tube on the gasket were sturdier, it would be less likely to prevent the earbuds from sitting securely in their case and charging properly.

The lawsuit names a laundry list of other design issues that could contribute to the Powerbeats Pro’s failure to properly charge, including that the ear hooks can become “easily tangled” in the case and prevent the earbuds from connecting to the pins. Per the suit, the pins are not long enough to reach the charging circuit if the earbuds are not positioned perfectly in the case.

The suit further claims that the case well is not deep enough to allow for easy placement of the earbuds and the magnetic force cannot adequately secure them to allow for proper charging.

The lawsuit also attributes the charging problems to a potentially poor circuit design that causes only one of the earbuds to receive all the charging power while power to the other gets shut off.

The lawsuit goes on to claim that another reason the Powerbeats Pro fails to properly charge is the charging points’ propensity to corrode when they come into contact with a user’s perspiration.

According to the suit, although the Powerbeats Pro was advertised as “built for performance with a reinforced design for IPX4-rated sweat and water resistance,” many users have “report[ed] the opposite.”

When a user attempts to contact Apple about the charging contacts’ corrosion due to sweat, Apple attributes the problem to “liquid ingress” and points to its terms and conditions that state the product’s warranty is voided when the earbuds are damaged by liquid, the case relays. The consumer is then left with no other option but to pay for costly repairs, the lawsuit says.

What if I live in a different state?

The lawsuit is only looking to cover those who live in the states mentioned in the above section. If you live in a different state and experienced charging problems with your Powerbeats Pro earbuds, you may want to reach out to an attorney in your area to find out about your legal rights and options. Attorneys usually offer free initial consultations.

When looking for an attorney, recommendations from friends and family are usually best, but you can also check with your state’s bar organization for referral services, or check out one of these attorney directories: Martindale, Avvo and LegalZoom.

There’s usually nothing you need to do to join or be considered part of a class action when it’s first filed. The time to take action is normally if and when the lawsuit settles, at which point those affected, known as class members, should receive notice of the settlement with instructions on how to file a claim for their share.

In the meantime, one of the best things you can do is to stay informed. Sign up for ClassAction.org’s free weekly newsletter here to get class action news and settlement information sent straight to your inbox.