A proposed class action alleges purportedly “non-drowsy” Robitussin is falsely labeled in that the over-the-counter cough medicine contains an active ingredient known to cause drowsiness.

Be sure to scroll down to see which “non-drowsy” Robitussin products are mentioned in the lawsuit.

The complaint contends that the “non-drowsy” claim found on Robitussin product labels is an important representation that consumers rely upon when deciding whether to buy the cough medicine. Neither the plaintiff nor other proposed class members would have bought “non-drowsy” Robitussin had they known the product contained an ingredient known to cause drowsiness, the lawsuit says. 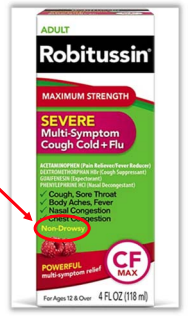 The plaintiff, a Los Angeles resident, claims to have become “unexpectedly drowsy at work" after taking “non-drowsy” Robitussin Cough + Chest Congestion DM. According to the filing, there is no disclosure on any “non-drowsy” Robitussin product label that the cough medicine does or can cause drowsiness, or that drowsiness is a side effect. As the lawsuit tells it, the defendants’ decision not to list drowsiness as a side effect was intentional.

“Indeed, Defendants labeled the products this way because they intended consumers to rely on the labels and to believe that the products would not cause drowsiness, so that consumers would buy more products or pay more for them,” the case claims.

A common side effect?

The lawsuit contends that drowsiness is a common and well-documented side effect of DXM, an active ingredient in the Robitussin products at issue. For example, the case says, one study found that “[s]omnolence [drowsiness] is a common side effect” of centrally acting cough suppressants that contain dextromethorphan. That study also found that more than 10 percent of users of products containing dextromethorphan develop drowsiness within three days of starting treatment with a DXM cough medicine, the complaint states.

Notably, the patients in the study were given a smaller dosage of DXM than the recommended dose found in many Robitussin products, according to the complaint.

Whether an over-the-counter drug is non-drowsy is material to consumers, the suit argues, noting that a reasonable consumer would prefer to take a drug that does not cause drowsiness when they need to be awake or when they would prefer to be alert.

“In many situations, taking a drug that does or can cause drowsiness can be dangerous,” the suit continues, adding that the Federal Aviation Administration, for instance, prohibits pilots from flying for 48 hours after ingesting DXM.

Which Robitussin products does the lawsuit say are falsely labeled?

The specific “non-drowsy” Robitussin products at issue in the case are:

The suit stresses that some other drug makers do not falsely market DXM-containing drugs as non-drowsy. For instance, the case says, Mucinex DM contains DXM, but its manufacturer does not claim the drug is non-drowsy because “this is not the truth.”

Per the case, GSK “could have simply omitted the false and misleading statement, ‘Non-Drowsy’” from their products or included a disclosure that the Robitussin items may cause less drowsiness that other Robitussin products.

The suit looks to represent all consumers who’ve purchased any of the above-listed “non-drowsy” Robitussin products in the United States during the applicable statute of limitations period. For certain claims, the case also looks to cover a “subclass” of “non-drowsy” Robitussin buyers who live in Washington D.C. and 44 of the 50 states, excluding only Alabama, Alaska, Florida, Indiana, Iowa, Kentucky and Mississippi.

I have bought “non-drowsy” Robitussin. What should I do now?

After a class action is initially filed, the only thing a consumer can do, really, is sit tight and stay informed. Generally speaking, there’s nothing you need to do to join or be “included” in a class action. In truth, it’s usually only if and when a case settles that consumers who are covered by the litigation, called “class members,” would need to act, which usually involves filing a claim form online or by mail.

If the Robitussin class action were to settle, for instance, buyers who are covered by the suit would most likely receive a notice, via email, standard mail or both with instructions on what to do next, how much compensation is involved and details as to their legal rights.

It’s important to remember, though, that class action lawsuits generally take some time to work their way through the legal process, usually toward a settlement, dismissal or arbitration outside of court. Those who have bought any of the “non-drowsy” Robitussin products listed on this page should sign up for ClassAction.org’s free weekly newsletter.