The proposed class action detailed on this page has settled. The deal was given preliminary approval by U.S. District Judge Wilhelmina M. Wright on December 16, 2021.

Head over to our blog page to learn more.

Hundreds of dishwasher models made by Whirlpool and sold under the KitchenAid, JennAir, Maytag and Kenmore brand names suffer from a defect that can cause significant leakage and property damage, a proposed class action alleges.

The 48-page lawsuit, filed in Minnesota federal court, links the costly problem, which apparently plagues more than 900 Whirlpool-made dishwasher models, to an incorrectly oriented pump motor diverter shaft seal, a small ring found at the bottom of a dishwasher.

According to the complaint, the inverted orientation of the pump motor diverter shaft seal in affected dishwashers can accelerate the seal’s degradation and allow for the build-up of debris from dirty dishes, which can prevent the shaft seal spring from properly sealing off water between a dishwasher’s diverter shaft and sump.

As a result ofthe issue, the dishwashers can leak significantly from the bottom and ultimately damage cabinets, flooring and other property in a consumer’s home, the suit says.

Defendant Whirlpool Corporation, fresh off a $21 million settlement in a class action over bottom-mount fridge leaks, has known of the dishwasher seal defect “for at least eight years” yet has failed to fix the problem under warranty or inform consumers of the issue prior to sale, according to the case.

“Whirlpool has placed the burden of repairing this defect and paying for the costs of repairs to the adjacent personal property damaged by the defective Dishwashers upon the consumers,” the lawsuit alleges.

It is intended to be designed with the sump assembly and installed in such a manner that creates a leak proof seal. As the dishwasher begins to run and water is pumped into the spray arms, a spring between the diverter shaft squeezes into the Diverter Shaft Seal and creates a watertight seal.” 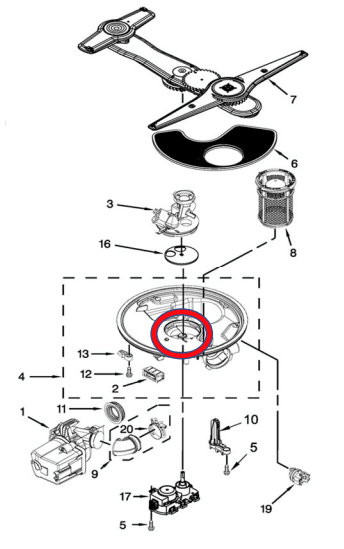 Although the diverter shaft seal is, according to Whirlpool’s manufacturer’s installation instructions, supposed to be affixed “in an orientation towards the tub,” so as to protect against hot soapy water and dish debris while the dishwasher cleans, affected dishwashers are equipped with seals affixed in an inverted position, leaving the seal exposed to hot soapy water and debris from dirty dishes, the suit says.

As debris and soap exposure builds up and the improperly positioned seal starts to degrade (pictured), water can begin to leak between the sump and tub and eventually through the entire unit onto floors and inside cabinetry, the lawsuit says. 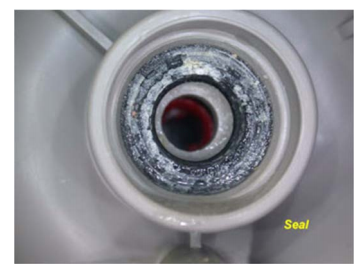 According to the complaint, leakage from the seal defect “often begins so slowly” that a consumer may not notice the problem until after the seal has failed completely and their kitchen or other property has been damaged.

In all, the plaintiff charges Whirlpool’s marketing of its dishwashers, which range in price from $500 to $700, as “high-quality” and industry-leading with regard to repairs endured by consumers is not entirely accurate. Per the lawsuit, affected Whirlpool-made dishwashers often fail well before 10 years of use, and many times “within the first four years” of service life.

Which dishwashers does the lawsuit say are defective?

According to the lawsuit, Whirlpool-made dishwashers affected by the seal defect were sold under the following brand names.

The case claims there are “more than 900 models, including those listed here,” that suffer from the seal defect.

The case goes on to claim that although Whirlpool has ensured it will, within one year of the purchase date, “pay for Factory Specified Replacement Parts and repair labor to correct defects in materials or workmanship that existed when this major appliance was purchased, or at its sole discretion replace the product,” the company has done the opposite, often denying warranty claims and selling replacement parts afflicted by the same backward seal defect.

Regardless of whether the seal defect manifests within a consumer’s one-year warranty period—and despite having knowingly sold defective dishwashers—Whirlpool “refuses to replace or repair” the products, and instead offers only to sell a full sump assembly with a new, yet still defective, diverter shaft seal attached to it, the lawsuit says.

With a new component, which costs approximately $60 to $75, the cost to repair a Whirlpool dishwasher’s defective sump and diverter motor assembly sits at roughly $200—nearly 1/3 the cost of the original dishwasher—or more with installation expenses, the complaint reads.

Further, the case relays that many appliance repair companies, knowing full well of the nature and extent of the Whirlpool seal defect, “do not want to risk replacing the sump assembly” due to fear that the new diverter shaft seal will still be installed upside down and fail again.

According to the lawsuit, Whirlpool’s warranty is “unconscionable” given the company possessed knowledge of the seal defect at the time of sale and has offered merely “band-aid” repairs that do not fix the problem. Still further, in the event the defendant replaces an entire dishwasher, Whirlpool reduces the new product’s warranty to the remaining term of the original dishwasher, the case says.

The case looks to cover a class of consumers in Minnesota who own or owned a Whirlpool-manufactured dishwasher with an inverted diverter shaft seal.

I don’t live in Minnesota. What can I do?

If you live outside of Minnesota, fear not. Although the proposed class action, at this point, aims to represent only Minnesota residents, it’s entirely possible other lawsuits will be filed in the near or not-too-distant future that look to cover consumers nationwide or in other states.

For now, it’s best for Whirlpool—and KitchenAid, JennAir and Maytag—dishwasher owners to sit tight and check back with this page for updates, as any new developments will be detailed at the top of this post.

At any rate, these types of cases almost always take a while to work their way through the legal system, usually toward either a settlement or dismissal. This means it might be a while before the time comes for those who might be considered part of the “class” to submit claims for whatever compensation the court feels is appropriate.