Gawker Media has built a wildly successful business out of what is, essentially, micro-blogging supported by social media. Like all companies, Gawker has its downsides – and according to a lawsuit filed in federal court in New York, Gawker’s downside is simple: if you’re an unpaid intern, you’re being illegally exploited. (Yup – it’s another unpaid interns lawsuit.)

Former interns Aulistar Mark and Andrew Hudson have brought a collective action against Gawker and its owner, Nick Denton, claiming the company breached the Fair Labor Standards Act, a federal law, by failing to pay its interns while asking them to carry out employee-level tasks. As a collective action, rather than class action, the lawsuit is an “opt-in” case – meaning that potential plaintiffs (in this case, current and former Gawker interns) must choose to take part. In a class action, a suit is filed on behalf of class members whether they’ve elected to take part or not. It’s an important difference, because in this particular suit, plaintiffs plan to ask people to opt-in to the suit by contacting them via social media. They’ve got names, they’ve got permission from the judge, and now they’re ready to act.

This is where things get interesting. Attorneys for Mark and Hudson have been given the go-ahead to seek out potential plaintiffs using social media – a legal tactic still very much in its infancy, but one that seems especially well suited for a case against Gawker, which is itself a company heavily reliant on social media. This week, however, Gawker wrote to the judge presiding over the case and layed out several concerns it has about the social media plan. The move has raised a lot of eyebrows considering Gawker’s own extensive use of social media and viral content – but, as part of the legal process, Gawker has every right to complain to the judge if the company feels things are being done unfairly.

They Don’t Like This: Gawker’s Problem with Collective Action Notice

This is true – but Gawker’s complaint itself recognizes that contact information for many potential plaintiffs is missing, meaning social media may be the best way to reach people. Perhaps Gawker’s bigger worry, though, is that allowing news of the suit to be spread via social media will damage the company’s reputation by shining a light on something they’d rather stay hidden. Not paying interns – possibly in violation of the FLSA – looks bad, and Gawker (described fairly accurately as a “gossip site” in this excellent take down in the New York Times) doesn’t want to look bad. The result is almost petulant; a complaint that using social media to spread word of Gawker’s actions just isn’t fair.

Gawker seems to have taken umbrage at how easy it now is for the plaintiffs to notify other unpaid interns about the lawsuit. Their argument – that notice is usually only given once, so should only be given once this time – seems a tad insincere given the company’s good knowledge of the fast-paced nature of social media. It’s also worth noting that for an innovative new media company, Gawker sure seems resistant to the exciting new opportunities being offered by the web. In the letter to the judge, Gawker’s lawyers make several broad requests, including:

From there, Gawker moves on to social-media-site-specific issues, writing (with what certainly sounds like barely concealed annoyance) that “given the Court’s determination to permit notice of this lawsuit via Twitter, Gawker does not object to the creation of a Twitter account by Plaintiffs’ counsel, or their sending of a tweet inviting potential collective members to join the case.” Gawker does, however, object to

The remainder of the letter also sets out Gawker’s preferred system for contacting plaintiffs via LinkedIn, Reddit, and Facebook, about which Gawker notes that:

“Again accepting as law of the case that Plaintiffs will be permitted to use Facebook to disseminate notice, Gawker does not object to the creation of a Facebook page called GawkerInternLawsuit.”

Well, that’s nice of them.

Attorneys for Gawker also offer their opinion on whether Tumblr should be included in the list of approved social media sites used to contact the media company’s former unpaid interns. (It should not, sayeth Gawker, because “permitting Plaintiffs to create a blog is equivalent to their creating a website, and Plaintiffs already have been permitted to create two of those – GawkerInternLawsuit.com and GawkerClassAction.com. There is no need for a third.”)

In the world of Gawker, apparently, there’s no need for a lot of things.

One the one hand, this is an interesting move by Gawker’s lawyers – and some of their points do make sense (the suggested prohibition of inflammatory hashtags, for example). Other requests sound like semantics and, perhaps worse, attempts to limit access to the lawsuit by stifling the free flow of information. (Does it really matter if the Facebook campaign is run through a Page, rather than a group? For Gawker, it does.) It will be interesting to see the court’s response, especially considering any precedents this could set for contacting defrauded workers in future collective actions.

In the end, Gawker is in the business of exposing secrets and enjoying the online reaction, but when things are reversed, doesn’t seem to see the funny side. Should rules be established governing the use of social media in opt-in lawsuits? Absolutely. Should Gawker get to say what those rules are? Absolutely not. 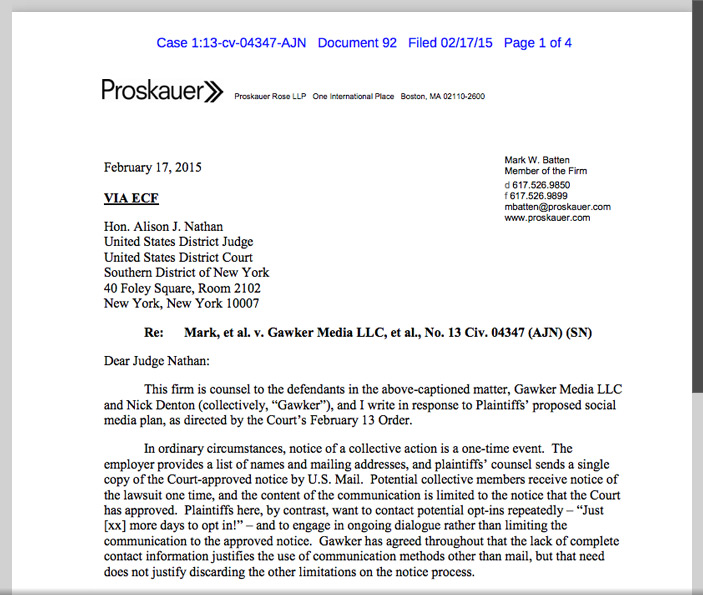