The 26-page proposed class action lawsuit centers on what artist Michael McLeer, better known as Kaves, calls the NYPD’s “attack” on hundreds of legally permitted works of graffiti art across each of New York’s five boroughs. According to the complaint, the NYPD’s graffiti clean-up campaign, which was touted in the media as a trust-building collaboration between the public and the police, lacks an adequate budget and volunteers properly trained to undertake the job, among other shortcomings, and stems from the uptick in anti-police sentiment.

For its part, the NYPD has failed to ask property owners about whether certain artwork was made with permission, neglected to investigate the basis of “tips” it received and made “on-the-fly judgments” about which pieces should be “cleaned up,” the complaint says. The lawsuit alleges the NYPD and the City of New York’s graffiti clean-up campaign has ultimately violated the Visual Artists Rights Act and deprived artists of their constitutionally protected rights to free speech and property interests.

According to the lawsuit, one of the plaintiff’s best-known pieces, a 12-foot-by-30-foot mural in Brooklyn titled “Death from Above,” is among those to have fallen victim to the NYPD’s alleged indifference—or ignorance—toward permitted, revenue-generating street art: 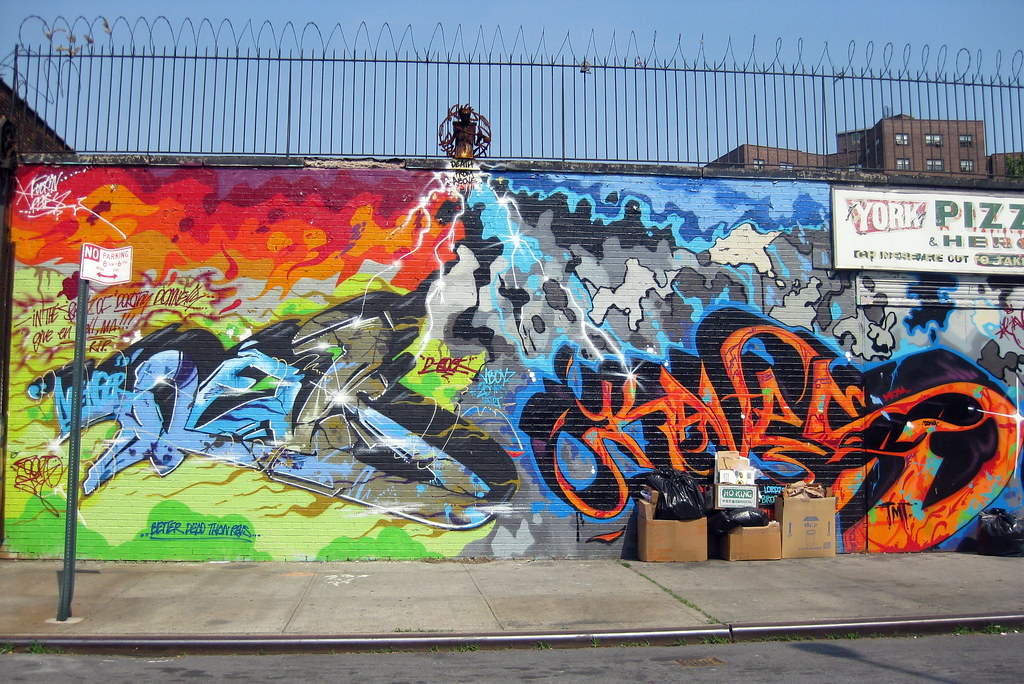 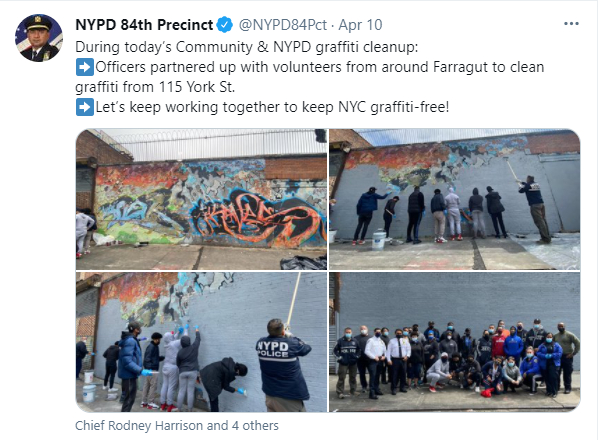 “Using an undiscerning eye and obtuse brush, the untrained crew went out to blot out art from street canvases,” the complaint, filed on June 1 in New York’s Eastern District Court, says. “As a result, the City and the NYPD has permanently destroyed valuable and recognized artwork and trampled on the reputation and rights of artists under the Visual Artists Rights act and under the Constitution.”

The plaintiff, a founding member of the Lordz of Brooklyn, prolific graffiti creator and member of the hip-hop community, asks the court for monetary and punitive damages and demands the NYPD’s graffiti clean-up campaign stop immediately. Further, he requests that the NYPD’s policies with regard to graffiti destruction be subject to a public hearing and review that includes artists and members of the community and asks that the department’s graffiti clean-up campaign be declared illegal.

The war on graffiti

Despite the modern-day recognition and appreciation for street art, graffiti artists remain in a precarious position in that the law condemns unpermitted artworks as a criminal offense, the lawsuit relays. Compounding matters, the plaintiff shares, is the “apparent mismatch” between the concepts of criminal justice, artistic creation and copyright law, which the case says subjects artists not only to “arbitrary law enforcement” but also “exacerbates the chilling effect on artists’ rights to enjoy the protection of free speech and property rights.”

Since the early 1980s, the NYPD has taken a blanket approach toward handling graffiti that closely resembles the way it treats vandalism, the suit says. In more recent months, the NYPD has allegedly “taken a heightened stance” against graffiti that expresses an anti-police sentiment, in particular among calls to defund the police.

What’s transpired, according to the suit, is a campaign in which the NYPD considers all street art “’litter’ that needs to be cleaned up.”

At issue in the lawsuit is not illegally made street art but rather authorized, legally permitted graffiti and the NYPD’s alleged inability or disinterest to differentiate between the two. This is a failure the plaintiff charges can be traced directly to the department’s blanket approach from decades past. From the complaint:

This case is about the NYPD’s lack of training about art, copyrights, and the value of art on the urban scape. This case challenges the NYPD’s obtuse conduct, policy and rhetoric that undermines all street art as ‘litter’ that needs to be cleaned up.”

The plaintiff, whose exhaustive resumé includes work for everyone from Nike and Adidas to Metallica and MTV, as well as art that has appeared in neighborhoods and museum galleries around the world, alleges he and similarly situated artists “have been and will continue to be attacked” by the NYPD for the duration of its clean-up campaign—regardless of whether their street art is authorized, long-standing, recognized and/or protected by law.

The complaint further claims the NYPD’s efforts have and will continue to discourage artists from expressing their opinions about the police, including beliefs about defunding, and from making art in support of protests against police abuse of power.

At the center of the lawsuit is the NYPD’s April 2021 destruction of the plaintiff’s “Death from Above” mural, which was created in collaboration with another artist on a previously dilapidated wall with the intent of brightening up the location and enhancing the community and property’s appeal, the plaintiff relays. Per the suit, neither the NYPD nor the city asked the property owner, tenant or the plaintiff whether the mural was authorized, and neither of the defendants provided any prior notification before the mural was destroyed:

The artist Kaves, the property owner, the tenant of the property, and many community members were shocked and enraged by the NYPD’s attack on the Mural which had been appreciated and preserved by the community for more than 13 years since its creation, and had become a community landmark.”

“Death from Above” was, in fact, a piece authorized by the owner of the wall on which it was created, the case says. As the mural’s copyright holder, the plaintiff, who stresses that street art in New York is sought out by tourists year-round and can generate significant revenue, was entitled to single-use licensing fees in excess of $9,000 for “Death from Above,” the lawsuit says. His experience with the NYPD destroying the long-standing piece, painted as a dedication to Kaves’ and the collaborator’s mothers, is emblematic of what other graffiti artists have gone through and will continue to go through regarding the erasure of their ability to earn money on their artwork [emphasis ours]:

Upon information and belief, street art and graffiti have become a well-appreciated art genre that is highly valued in the art market. Graffiti and street art of all kinds and sizes are sold and licensed at quantifiable monetary value. The destruction, modification, and mutilation of those artworks without notification has created monetary loss to artists who were unable to salvage their art, and have lost property interest in licensing, selling, and loss of professional reputation.”

The plaintiff lays all of this at the feet of the NYPD. More from the complaint:

Upon information and belief, NYPD lacks a clear procedure, training, or protocol to determine which works or art are protected under the Visual Artists Rights Act, or even to distinguish between art and vandalism.

Moreover, upon information and belief, NYPD does not even have a protocol in place to confirm with property owners whether the murals and artworks were created with permission. This also means that the NYPD lack a clear directive on how to instruct their police officers and so-called volunteers how to properly discern ‘vandalism.’”

According to the suit, social media commentors who’ve come across news of the NYPD’s “attack” on the plaintiff’s “Death from Above” mural have said it was motivated by “political propaganda,” “bureaucracy,” and “ignorance.”

The lawsuit looks to represent all individuals who have installed artworks with permission from property owners or operators within the City of New York and whose artworks have been or may in the future be destroyed, mutilated or distorted by the NYPD.