The proposed class action lawsuit detailed on this page has been dismissed without prejudice.

In a 14-page order granting in part Owlet Baby Care’s motion to dismiss, United States District Judge Howard C. Nielson, Jr. stated that aside from the “vagueness and inconsistency” with which the plaintiffs described their issues with the Smart Sock baby monitors, the consumers failed to allege “sufficient factual content” to support their claims. More specifically, Judge Nielson wrote the plaintiffs failed to sufficiently allege that their experiences with the product are different than what a reasonable consumer would expect and indicative of a defect such that the baby monitor is not fit for ordinary use.

“In sum, Plaintiffs fail to allege what Defendant should have disclosed, what a reasonable consumer would have expected from a pulse oximeter, and whether there was a difference between the two,” the order reads.

The plaintiffs have leave to file an amended lawsuit by June 30, 2020. The dismissal order can be read here.

Owlet Smart Sock baby monitors are the subject of a recent proposed class action lawsuit that claims the devices do not monitor babies’ heart rates and oxygen levels as promised and can burn infants’ feet even when used properly.

Despite receiving numerous customer complaints about false alarms and the monitors’ tendency to malfunction, Owlet, the case says, has refused to address the issue or warn consumers about the product’s apparent defects. Instead, the company continues to use “every opportunity” to justify the Smart Sock’s high price tag of $299, a “hefty premium” compared to similar products.

The Owlet Smart Sock: What’s This All About?

Since 2015, defendant Owlet Baby Care, Inc. has sold a wearable baby monitor that purportedly uses “pulse oximetry technology” to track babies’ heart rates and oxygen levels. If those levels fall outside of a preset range, the device is supposed to send an alert to a parent's smartphone via a Bluetooth-enabled base station placed near the baby.

Owlet allegedly promises in advertising and marketing materials that the monitor, dubbed the Owlet Smart Sock, will provide parents with “peace of mind” by giving them “insight into the health and well-being of their infant.”

What Does the Lawsuit Claim?

According to the 39-page complaint, Owlet Smart Socks are wildly inaccurate.

The suit says the monitors tend to report false alarms, often multiple times per night, that fill parents with fear and anxiety about their babies’ health – a far cry from the “peace of mind” that the company promised. The false alarms apparently happen so often that Owlet, fully aware of the issue, has referred to them as “false alarm fatigue.” Despite coining a term for the Smart Sock’s apparent inaccuracy, Owlet, the suit says, hasn’t said a word about it to consumers.

So, if the Smart Sock reports false alarms so often, you’d think it would at least be pretty accurate when a baby’s vitals are actually abnormal, right? Not according to the lawsuit.

The case claims there are instances in which the Smart Sock should have alerted parents to a baby’s abnormal heart rate or oxygen levels, but didn’t. The device, the suit says, completely fails to perform the function for which it was designed and advertised, leaving parents without any of the “peace of mind” they expected in return for the hundreds they handed over for the monitor.

On top of all that, the lawsuit also claims the Smart Sock can malfunction and burn babies’ feet during normal use. The complaint cites a post from Owlet’s Facebook page in which a parent displayed a picture of her baby’s foot showing a “large burn mark” that she apparently discovered after removing the Smart Sock. 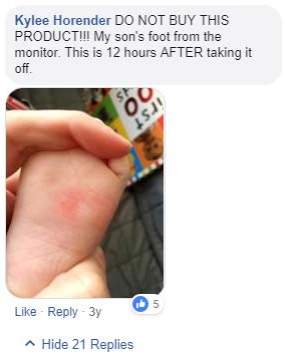 The first named plaintiff in the suit says she received the Owlet Smart Sock 2 as a gift around August 2018. Within the first two weeks of using the product, it gave her two “red” alerts, the case says, which are the most “critical and immediate” of the Smart Sock alarms. The first alert reported low oxygen and the second showed both low oxygen and an abnormal heart rate, the suit says.

After each alert, the plaintiff called 911, the case goes on, but the paramedics found her baby’s oxygen levels and heart rate to be within the normal range both times.

Believing she had a defective unit, the woman returned her Smart Sock 2 in exchange for a new one, the suit explains. Nevertheless, the new monitor was apparently no better and gave her two false alerts within the first week of use.

The second plaintiff says she purchased the Owlet Smart Sock 1 in October 2016. The next month, the woman apparently checked on her daughter, who was wearing the Smart Sock at the time, and “noticed her turning purple” due to low oxygen. The low oxygen levels were confirmed by her pediatrician immediately after, the case says.

In December 2016, the suit continues, the second plaintiff again noticed her daughter turning purple while wearing the Smart Sock and rushed her to the hospital, where she was admitted to the ICU for low oxygen levels. The woman claims the Smart Sock never alerted her to her daughter’s low oxygen levels either time, which was the very purpose for which she purchased the monitor.

Even after Owlet sent the woman a new “beacon,” the part of the device responsible for monitoring vitals, the Smart Sock apparently failed a third time to detect and report the baby’s low oxygen levels.

Who Is the Lawsuit Seeking to Cover?

The case was filed on behalf of a proposed class of individuals in the United States who purchased an Owlet Smart Sock within the last four years, with three proposed sub-classes of California purchasers.

How Can I Join the Lawsuit?

You typically don’t need to do anything to join a class action lawsuit. If a case settles, potential class members should receive notice of the settlement with instructions on how to claim their piece. You can find more information about that process here.