A proposed class action filed this week claims Samsung’s Chromebook Plus 2-in-1 computers are plagued by a defect that can cause the laptop/tablet device’s hinges to break off and damage the screen.

According to the 42-page case, a key feature of the Samsung Chromebook Plus upon its  January 2017 release was the device’s 360-degree rotating touchscreen that allowed the laptop  to convert into a tablet. The lawsuit alleges that although Samsung touted the supposedly durable Chromebook Plus’s “supreme flexibility,” buyers were not told that the device’s hinge assembly is prone to detach from its plastic mounting point behind the display. When this occurs, the hinge assembly can ultimately break through the screen when a user attempts to open the laptop or adjust the screen, the complaint says.

When the inherent defect manifests, Chromebook users are unable to open the laptop or change the display angle without causing the screen to “split, rupture, or suffer other serious damage,” the suit says. Moreover, the lawsuit, filed in New Jersey District Court on November 1, alleges that when a Chromebook Plus owner attempts to have their device repaired or replaced, Samsung “typically denies” that the problem was caused by a defect and blames the damage on user error in order to avoid having to pay for repairs.

The case says the alleged defect in the Chromebook Plus, which reportedly retails for over $449, renders the device unusable for its intended purpose and robs buyers of the value they believed they would receive when they purchased the product.

“The Defect thereby deprives Plaintiff and the Class members of the defining feature of their Chromebook Plus: the ability to use their devices as either a tablet or a laptop,” the complaint charges, claiming consumers would not have bought the devices, or would have paid substantially less, had they known of the hinge issue.

Lawsuit: Alleged Chromebook Plus Hinge Defect Due to Plastic Mounts

The lawsuit pins the apparent propensity of the Chromebook Plus to break—both during and outside its warranty period—on a defective hinge assembly. 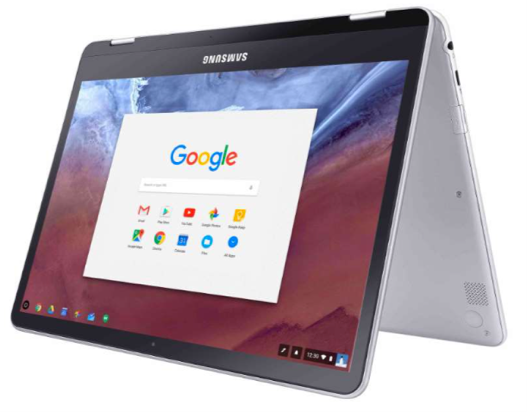 According to the case, the hinge assembly that connects the device’s display to its chassis is mounted with three small screws into a piece of plastic behind the display screen. Per the filing, the hinges are designed to resist movement and hold whatever position they are put in to ensure that the laptop screen can be used at various angles. The lawsuit hypothesizes that the defect stems from failure and subsequent detachment of the plastic hinge mounting point behind the Chromebook Plus screen.

Thus, when a user applies force to the display to open the laptop or adjust its position, the detached hinge arm exerts pressure on the underside of the screen glass, causing it to shatter and damage the device’s screen, the suit says.

The lawsuit alleges that when the hinge defect in the Chromebook Plus manifests, the device is rendered unusable in most cases given a broken screen can be dangerous. In fact, the case relays that Samsung’s Chromebook Plus user manual warns consumers not to use the product if it is cracked or broken since pieces of glass can cause injury, and a broken computer can pose an electric shock or fire risk.

The lawsuit claims Samsung has refused to address the alleged hinge defect in its Chromebook Plus devices despite having “exclusive and early knowledge” of the problem’s existence.

According to the case, although Samsung likely discovered the defective hinge problem during pre-release testing, numerous warranty repair claims and online user complaints should have alerted the manufacturer to the problem as early as 2019.

The lawsuit says hundreds of complaints regarding the Chromebook Plus hinge problem can be found on Samsung’s own product page in addition to retailers’ websites and online forums such as Reddit, with many of the reviews containing pictures that purport to show defect-related damage to the convertible laptops: 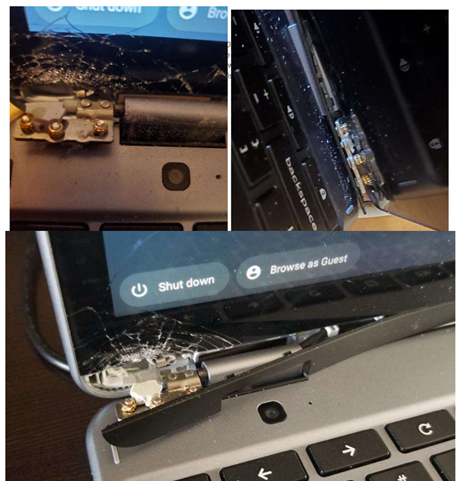 While it appears Samsung has agreed to cover repairs for a “small minority” of Chromebook Plus users, the manufacturer, the suit says, more often blames the damage on users themselves, or maintains that the defect is “cosmetic” and therefore not covered under warranty.

Moreover, on the “rare occasion[]” that Samsung decides to honor its warranty, the company typically chooses to repair a broken Chromebook Plus with similarly defective hinges that fail to fix the underlying problem, according to the complaint. As one Reddit user put it, “it’s just a matter of time before it happens again,” the case relays.

The lawsuit aims to represent anyone in the U.S. who purchased a Samsung Chromebook Plus 2-in-1 laptop/tablet device.

A subclass has also been proposed for those who bought the product in Oklahoma.

There’s typically nothing you need to do to join a class action when it’s first filed. The time for consumers to take action is generally only if and when a settlement is reached. If this lawsuit settles, those who fit the aforementioned criteria, i.e., the “class members,” will have an opportunity to file a claim for whatever compensation the court deems appropriate.

In the meantime, though, one of the best things you can do is stay informed. ClassAction.org will post any notable updates to this page, so be sure to check back often for the latest.

You can also get class action news and settlement information sent straight to your inbox. Sign up for ClassAction.org’s free weekly newsletter here.