According to the 43-page case out of New York, Fisher-Price and parent company Mattel knew full well about the risks posed by the apparently defective product yet disregarded recommendations from the American Association of Pediatrics (AAP) and went on to sell millions of units of the inclined infant sleeper insisting it was safe. Retailers such as Amazon, the case says, kept the product for sale despite prevalent safety concerns.

The Rock ‘n Play Sleeper’s eventual April 2019 recall came too late “for dozens of other children who have died” after being placed in the product, the suit states.

What is the Rock ‘n Play and why is it dangerous?

The Rock ‘n Play is an infant sleeper product that first hit store shelves in the United States in October 2009. Touted by Fisher-Price as perfect for both sleep and playtime, the hammock-shaped product simulates a gentle rocking motion, has high sides and sits at an incline, the case explains, which causes an infant placed into the sleeper to also sit at an incline. An extra angle at the bottom pushes an infant’s legs upward, causing the child to lay in a semi-seated position, the suit depicts. 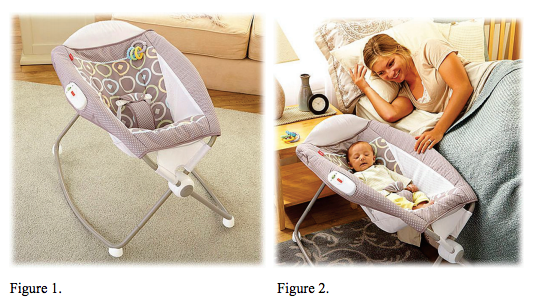 The problem with the product, the lawsuit stresses, is that its shape allows infants to move themselves into positions in which they’re unable to breathe against the Rock ‘n Play’s padded side surfaces. Additionally, the case goes on, the degree of the product’s incline can cause an infant’s head to pitch at such an angle that breathing can become impaired while at the same time presenting the risk of head and neck injuries.

Concerns with the Rock ‘n Play from the get-go

Fisher-Price advertised the Rock ‘n Play sleeper as “a miracle product” that could help exhausted parents grab some much-needed rest while their infants slept through the night thanks to the product’s soothing back-and-forth motions. With regard to the age range for the product, Fisher-Price, according to direct communications with consumers cited in the lawsuit, said the Rock n’ Play was to be used from birth until a child is able to grasp the side and pull upward or sit unassisted.

Some consumers, after performing their own research, questioned whether the Rock ‘n Play was safe and approved for nighttime sleep. The lawsuit cites assurances from Mattel Consumer Services that the Rock ‘n Play was in fact safe when used according to its instructions. The consumer uncertainty, the case posits, may have come from long-standing advice from the American Academy of Pediatrics (AAP) on how infants should sleep. From the complaint:

For decades, there has been a medical consensus that an infant should sleep on his or her back. The AAP has recommended that infants be placed to sleep on their backs since 1991.

In 2005, the AAP updated its safe sleep recommendations to reflect continued research in the field. The recommendations reaffirmed that infants should be placed on their backs to sleep and that firm sleeping surfaces be used. ‘A firm crib mattress, covered by a sheet, is the recommended sleeping surface.’ To ‘[a]void the development of positional plagiocephaly,’ the AAP recommended that caregivers alter the infant’s head position during sleep and not allow infants to spend excessive time in bouncers, carriers and car seats.”

In 2011, the AAP, the case continues, further expanded its infant sleep recommendations, noting that infants younger than four months “are particularly at risk, because they might assume positions that can create risk of suffocation or airway obstruction.”

Fisher-Price and Mattel’s lobbying at home and opposition abroad

While the Rock ‘n Play went on sale in the United States with minimal to no roadblocks (more on that in a moment), the lawsuit says that wasn’t the case abroad:

Around January 2011, Australian regulators found that the Rock ‘n Play was not safe for infant use as a sleeper because it was contrary to safe sleep recommendations and the angle allowed babies’ airways to be blocked. Australia never permitted the sale of the Rock ‘n Play.

Canadian authorities also took issue with the Rock ‘n Play being sold as a ‘sleeper,’ opting to allow the product to be sold only as a ‘soother’ because of Canadian safe sleep recommendations raised by Health Canada in February 2011.

Also in February 2011, organizations in the United Kingdom told Fisher-Price that the product was not safe as a sleeper and safe for only short periods of use for play. In fact, a Consumer Reports investigation revealed internal Fisher-Price communications which acknowledged negative findings from the United Kingdom’s Royal College of Midwives and stated: ‘I’m afraid the findings don’t have good implications for a UK launch.’”

In the United States, the lawsuit says, Fisher-Price and Mattel, despite international objections, effectively lobbied to sidestep regulations that would have kept the Rock ‘n Play off the market. Upon its release in 2009, the Rock ‘n Play was marketed by Fisher-Price and Mattel as a bassinet. The following year, however, the Consumer Product Safety Commission (CPSC) began to change the requirements for bassinets and cradles, which included a limitation on the incline of these products.

October 2012 saw the CPSC submit these proposed rule changes to infant sleeper products to address reported incidents of suffocation/positional asphyxia caused by excess mattress pad angling, as well as “suffocation due to excess rock/swing angles.” The lawsuit claims, however, that the CPSC, at the urging of Mattel, excluded the Rock ‘n Play and similar products from the proposed rule changes.

In that same year, Mattel reportedly turned to a voluntary standard-setting group called ASTM International to create guidelines specific to inclined sleepers due to the regulatory changes that would require bassinets and cradles to have inclines of less than 10 degrees. The group “promulgated” its voluntary standards despite objections from international members. And, what’s particularly interesting, the suits says, is that one of the Rock n’ Play’s primary designing engineers happened to serve as the chairperson of the committee that developed these guidelines.

The CPSC in late-May 2018 issued a warning to consumers about inclined sleepers, stating it had become aware of infant deaths related to rolling over in inclined sleep products.

Almost as soon as it was released did the Rock ‘n Play become linked to infant injuries, the lawsuit says. One Amazon reviewer claimed that though the Rock ‘n Play “worked like a dream” at first, their infant was diagnosed two months later with torticollis and plagiocephaly. The suit mentions another Amazon reviewer who reported similar medical issues, reporting that their infant’s physical therapist quipped that “the Rock ‘n Play is keeping her in business.” A third reviewer claimed their infant’s use of the product led to him having to wear a nearly $4,000 helmet 23 hours per day to combat plagiocephaly.

As the suit tells it, the above instances are only a snapshot of the injuries infants have suffered after being placed in the Rock ‘n Play. Fisher-Price and Mattel have been sued no fewer than three times since the sleeper hit the market. All told, the lawsuit says more than 30 infants have died due to the Rock ‘n Play’s defective design.

The CPSC, in tandem with Fisher-Price, released on April 5 a warning over the safety of the Rock ‘n Play that stated the organization was “aware of 10 infant deaths” that had occurred since 2015 after children rolled from their backs to their stomachs or sides while unrestrained. All of the infants that died were three months or older, the CPSC said, recommending that consumers stop using the product by the time their infant was three months old.

Despite this warning, the complaint says, Fisher-Price “doubled down” on its claims that the Rock ‘n Play was safe. What followed were media reports calling for Fisher-Price to recall the product because it was tied to at least 32 infant deaths.

After Senator Richard Blumenthal (D-CT) added his voice to the chorus asking the CPSC to take action and immediately recall the Rock ‘n Play, Fisher-Price announced the recall on April 12, admitting that fatalities had occurred.