The proposed class action detailed on this page has been dismissed, with U.S. District Judge Edward J. Davila granting the plaintiffs “limited leave” to file an amended lawsuit by early next month.

In a 17-page order handed down July 19, the judge found that the plaintiffs failed to state any fraud claims stemming from Apple’s representations that its Retina display is “revolutionary,” “groundbreaking” and “the best Mac display ever,” among other marketing claims. Judge Davila challenged the plaintiffs’ argument that the claims were indeed actionable, finding that the court had no reason to alter its earlier conclusion that Apple’s marketing representations were “subjective and immeasurable assertions and thus constitute nonactionable puffery.”

The judge went on to pick apart the new claims made in the plaintiffs’ third amended complaint. According to the order, the amended complaint contained no actual examples or quotes from Apple promoting its MacBook Pros as having the best display screens in the industry and therefore could not support the additional allegation that the company marketed its product in this way. Further, the judge found that the new claim that Apple represents its products as being able to last for at least four years mischaracterized what the company actually said about the laptops’ life expectancy.

The plaintiffs’ claims that Apple fraudulently concealed the alleged Retina display defect also did not hold up. Apple argued that “no duty exists where the defect arises only after expiration of the warranty period, and that such an omission is not material (and thus not actionable) as a matter of law except when the defect poses a safety hazard.” Judge Davila sided with Apple, stating that the plaintiffs failed to allege that the Retina display issue arose before the expiration of the warranty period, meaning Apple, consequently, only had a duty to disclose safety issues.

“Plaintiffs have not alleged that the Alleged Defect presented any particular safety hazard,” the order reads. “Accordingly, the Court finds that the Plaintiffs have not adequately stated a claim as to the omission-based Deceptive Trade Practice Claims and fraudulent concealment claims.”

Judge Davila ended the order by noting that while leave to amend a complaint is generally granted liberally, the court feels a little differently this time around given the plaintiffs “have amended their complaint three times already.” Any amended complaint submitted by the plaintiffs must focus on the allegations that the apparent defect poses a safety hazard and that Apple knew “with certainty that the [a]lleged [d]efect would occur.”

A proposed class action lawsuit alleges the 13- and 15-inch MacBook Pro laptops introduced by Apple in 2016 come equipped with defective screens that, over time, can display a “stage lighting” effect at the bottom before failing completely. 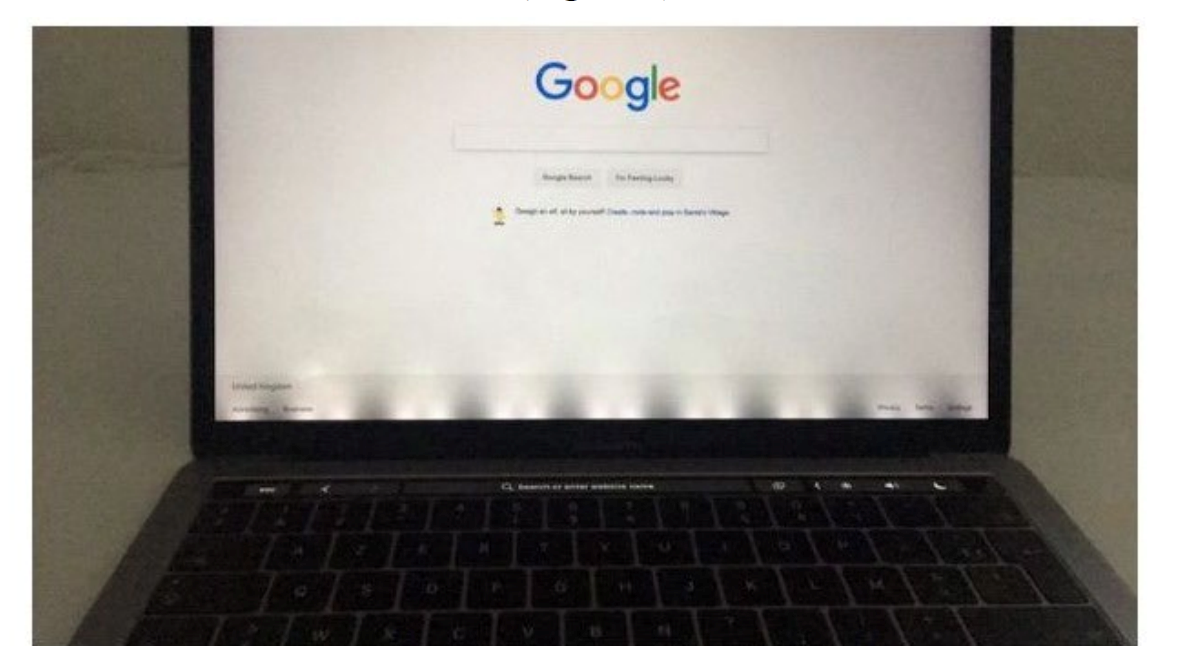 Apple “is aware, and has been aware” of the apparent defect since the affected MacBooks were released yet has concealed the problem from consumers while continuing to sell the computers, the lawsuit alleges.

The best MacBook display ever?

According to the 21-page complaint out of California, the “main selling point” of Apple’s updated MacBook Pro laptops was their display, which the Silicon Valley giant touted as its “brightest and most colorful Retina display yet” and “the best Mac display ever.” In order to make the MacBook models thinner and sleeker, Apple utilized thin, flexible ribbon cables to connect the display screen to the device’s display controller board. Per the suit, the ribbon cables are wrapped around a MacBook’s display controller board and secured by two spring-loaded covers. 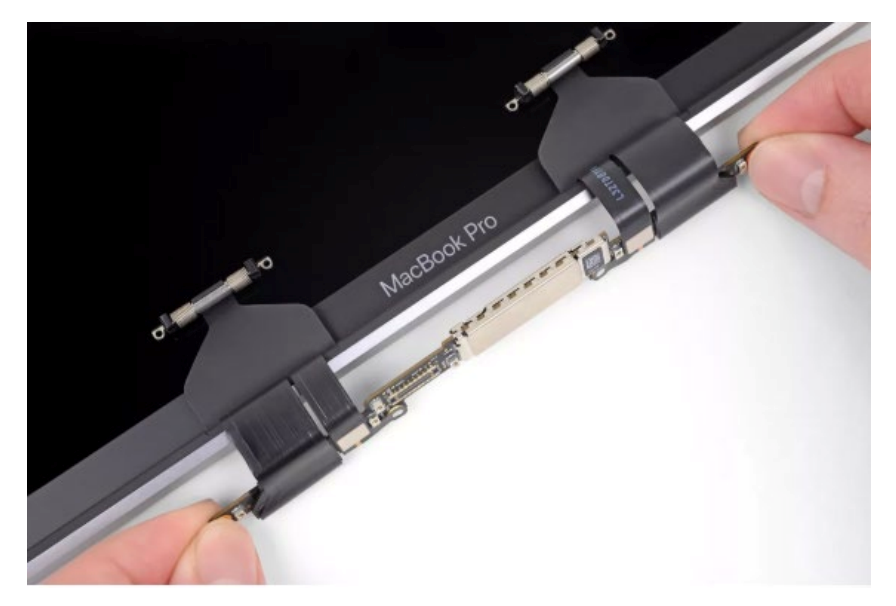 The case claims that while the ribbon cables function properly at first, their length and placement causes them to rub against the control board every time a MacBook is opened or closed. Over time, the consistent rubbing causes premature wear and tear (red arrow), which can lead to a “stage lighting” effect—alternating patches of light and darkness—at the bottom of affected displays, the lawsuit says.

As the wear and tear progresses, the Retina display’s backlighting system can fail completely when the computer is opened beyond 40 degrees, rendering the laptop “essentially useless,” the complaint alleges. Adding to consumers’ woes, the defect typically manifests outside of Apple’s one-year limited warranty for the MacBook Pro, causing users to pay out of pocket for repair, according to the suit.

Further, those looking to repair the display cables, which cost only a few dollars each, may run into trouble given Apple designed the cables as part of the Retina display itself, the lawsuit says.

“Consequently, the cables cannot be individually replaced,” the suit reads. “Instead, the entire display unit needs to be replaced when the display cables tear.”

Replacing a MacBook Pro’s entire Retina display can cost between $600 and $850, according to the complaint. Moreover, those with AppleCare plans “fare only slightly better” given that they’ll still need to pay $99 to $299 to fix a faulty display, the case continues.

Apple’s alleged knowledge of the issue

In all, it took Apple roughly two years to remedy the display problem, according to the suit. In July 2018, Apple released a new MacBook Pro model with display cables two millimeters longer than those found in the previous model, which the case says gave the cables more room to wrap around the display board and would prevent rubbing when a device was opened and closed.

In May 2019, Apple launched a program through which it agreed to replace the cables and/or displays for 13-inch MacBook Pro 2016 models experiencing the stage lighting defect or total display failure and refund those who paid out of pocket to fix the problem. The lawsuit notes, however, that both 13- and 15-inch MacBook Pros have evidenced the Retina display issue. Plus, Apple’s program reportedly does not cover 13-inch MacBook Pros sold after 2016.

To date, Apple “continues to deny there was ever a defect in its display cables,” the lawsuit says. The plaintiff, a 15-inch MacBook Pro owner, claims he was told in March 2020 by an authorized Apple service provider that AppleCare did not cover repairs to his display and that replacement would cost him $850. The consumer alleges that as of the lawsuit’s filing, he has been unable to repair his MacBook Pro due to the COVID-19 pandemic.

“Had Plaintiff known the display cable defect, he would not have purchased his MacBook or would have paid significantly less for it,” the complaint reads.

The lawsuit looks to cover all U.S. consumers who bought a 2016-year model or later MacBook Pro.

How can I be a part of the lawsuit?

There’s generally nothing you need to do to be part of a class action lawsuit. When and if a case that involves you is settled, you will likely receive notice via email or regular mail. That being said, many cases that are filed will hit roadblocks along the way and could potentially end up dismissed.

For now, those who may have bought a MacBook Pro 2016 with a faulty Retina display should sit tight and check back with this page for updates.

Get class action news sent to your inbox – sign up for ClassAction.org’s newsletter here.