The judge overseeing the case detailed on this page has dismissed the plaintiff’s claims, ruling that Trader Joe’s labeling of its Vanilla Almond Clusters cereal is in line with federal regulations.

According to a June 14 order, the plaintiff’s state law claims are preempted by FDA regulations, which require that a food labeled as “with other natural flavors” derives its characterizing flavor from both the characterized source (which, in this case, is vanilla) and natural flavors from a different source, such as “bark, bud, root leaf or similar plant material.” While the plaintiff asserts that the “natural” flavor is derived from artificial vanillin, U.S. District Judge Jeffrey S. White noted that vanillin is not automatically assumed to be artificial by the FDA and the plaintiff never plausibly alleged that the vanillin comes from an artificial, and not natural, source.

“The conclusory allegations that the flavoring is artificial are insufficient to state a claim,” Judge White wrote.

The judge went on to rule that the cereal’s labeling was unlikely to deceive a reasonable consumer since there were no descriptions that the product was made with vanilla or any vignettes or images depicting a vanilla plant or bean. Even if the product’s reference to “vanilla” did lead some consumers to believe the cereal was made with vanilla from vanilla beans, the representation is still not deceptive because the product does contain vanilla, Judge White added.

While the plaintiff was given 20 days to file an amended complaint, court records appear to show that she has not done so within that timeframe.

A proposed class action claims Trader Joe’s Company’s Vanilla Almond Clusters cereal is misleadingly labeled in that the product’s box does not disclose to buyers that the vanilla taste is derived predominantly from artificial flavors rather than real vanilla beans. 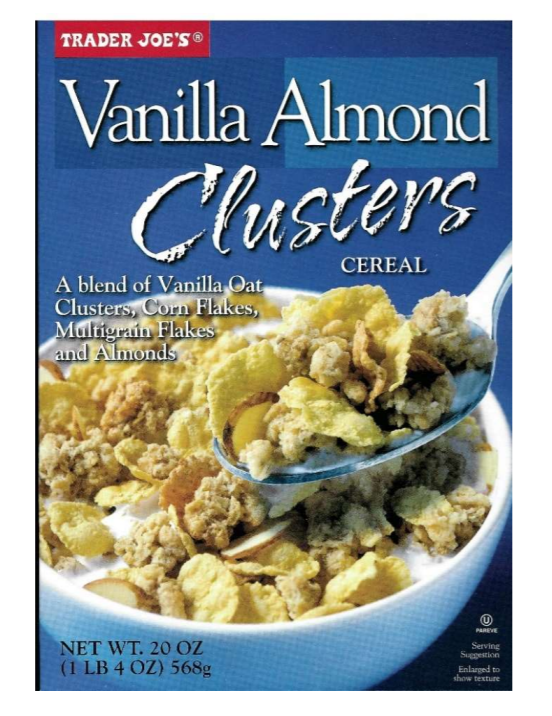 The 25-page lawsuit alleges consumers, upon reading the “Vanilla” representation on the front of the Vanilla Almond Clusters cereal box, are led to understand that the product is flavored exclusively, if not predominantly, by vanilla beans from the vanilla plant.

“Rather, the opposite is true,” the complaint alleges, claiming consumers have paid more for the cereal than they otherwise would have had they known it was flavored by cheaper synthetic vanilla substitutes, such as ethyl vanillin, and contained only a minimal amount of vanilla from vanilla beans.

As the case tells it, growing consumer demand for “natural vanilla ingredients” and climate-related vanilla shortages have “caused companies to cut corners when it comes to using vanilla in their products.” To combat widespread adulteration of vanilla with “cheap synthetics and substitutes,” the FDA introduced strict rules regarding the use of the term “vanilla” in labeling, regulations that include the requirement that any flavors not derived from the vanilla plant be disclosed as artificial flavors on a product’s front label, the suit says.

In light of the FDA vanilla rules, when consumers view the “vanilla” representation on the front of a box of Trader Joe’s Vanilla Almond Clusters cereal without any qualifiers, such as “flavored,” “artificial flavors,” or “with other natural flavors,” they falsely believe the vanilla flavor in the product comes only from vanilla beans, the lawsuit claims.

Scientific testing, however, has revealed that ethyl vanillin—an artificial, synthetic substance that is four times more potent than vanilla from vanilla beans—provides most of the cereal’s vanilla flavor, according to the suit.

“The Product contains an abnormal excess of vanillin relative to the profile of minor components in a vanilla preparation, which is a strong indicator it contains vanillin from non-vanilla sources, an artificial flavor,” the complaint avers, contending that the cereal also contains “high levels” of piperonal (heliotropin), another artificial flavor not found in vanilla.

The lawsuit argues that while consumers would not feel the need to check the Vanilla Almond Clusters’ ingredients list given the representations on the cereal’s front label, the fine print ingredient listing of “Natural Flavor” nevertheless fails to disclose that the product contains artificial vanilla and only a trace amount of real vanilla.

Though the “Natural Flavor” may contain “a small amount of real vanilla,” the ethyl vanillin component provides most of the cereal’s vanilla taste, the suit says.

According to the case, the product’s label was “designed to—and does—deceive, mislead, and defraud” consumers.

“Plaintiff lost money as a result of Defendant’s deception in that Plaintiff did not receive what she paid for,” the complaint argues.