United States of America Department of the Navy 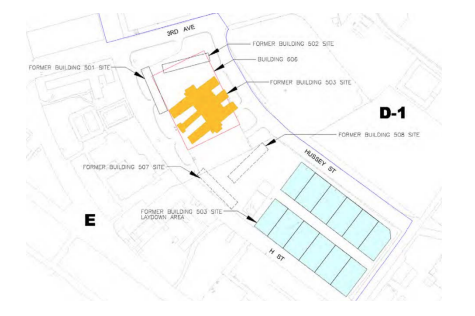 The 58-page lawsuit alleges SFPD employees have experienced acute symptoms and an elevated risk of developing life-threatening cancers and other diseases as a result of the United States of America and the Department of the Navy’s concealment of the truth about the hazardous substances used, stored and released at the 965-acre Hunters Point Naval Shipyard and failure to follow proper decontamination protocols.

The suit focuses in particular on the site of a former radioactive laundry, known as Building 606, that was leased to the SFPD.

According to the complaint, Hunters Point Naval Shipyard was used from the mid-1800s to roughly 1989 by private entities and, after the 1941 attacks on Pearl Harbor, the U.S. Navy for ship maintenance and repair work. Over the decades, the suit says, ship upkeep and repair activities caused the release of “waste oils, cleaning solvents, sandblasting materials, acid, and other hazardous substances,” including paint scrapings, metal rust and other cleaning debris, throughout the base.

Per the complaint, the Navy’s laundry activities caused the release of hazardous radionuclides into the soil and groundwater at the site of Building 606. Decades later, in the 1980s, pipes carrying waste oil contaminated with polychlorinated biphenyls (PCDs) broke and spilled the hazardous material on and around the property of Building 606, the lawsuit relays.

The suit alleges that before or during the construction of Building 606, the Navy failed to properly and safely contain and dispose of contaminated soil excavated from under the structure. Instead, the Navy laid the excavated soil “on the surface of the ground surrounding Building 606,” the case states.

From there, the lawsuit notes the U.S. Environmental Protection Agency found in 1989 that the extensive history of hazardous substance use, storage and release at Hunters Point Naval Shipyard qualified the site for inclusion on the federal list of EPA-regulated “Superfund” sites. With that designation, the Navy was to, under EPA supervision, “compressively evaluate and remediate” the shipyard before Hunters Point could be reused, according to the case.

Although the Navy had not yet conducted any comprehensive evaluation or remediation of the shipyard between 1989 and 1996, it entered into discussions with San Francisco with regard to a potential short-term lease of the Building 606 property for use by the city’s police department, the case goes on. Between those years, the Navy contracted with Tetra Tech, Inc., including with its predecessor company, PRC Environmental Management, to study and review Navy records in order to determine whether the Building 606 property could be safely leased to the city for use by the police and if the site complied with the statutory notification requirements enlightening San Francisco to the full history of hazardous substance use or release at Building 606, according to the complaint.

Notwithstanding the fact that the “extent of persistent contamination and human health risk” at Hunters Point Naval Shipyard, and in particular at the Building 606 property, remained both unknown and the subject of ongoing and future federal testing, the Navy informed San Francisco that its police department could safely use the Building 606 property without exposing employees to the risk of exposure to hazardous substances, the lawsuit alleges.

More specifically, the suit says the Navy provided San Francisco with a “Finding of Suitability to Lease” and property-specific environmental baseline survey results that contained “numerous material misrepresentations” regarding what exactly was in the ground and water at and around the Building 606 property. Per the case, the Navy falsely promulgated that:

“These statements were not only false, but were clearly and unambiguously false according to then-existing Navy records,” the suit charges, relaying the SFPD relied on the above-listed statements and others in deciding to relocate hundreds of employees to Hunters Point Naval Shipyard in 1997.

The lawsuit relays that Tetra Tech and its predecessors were required under their contracts with the Navy to, among other objectives, oversee and perform extensive testing and remediation at Hunters Point Naval Shipyard, moving through the base, parcel by parcel, to sample and test soil to determine whether suspected hazardous substances were present in levels unacceptable under the cleanup goals set by the EPA. When elevated hazardous substance levels were found, the complaint continues, the company was required to then perform additional sampling and testing until it found soil that tested clean, and thus marked the boundary between non-contaminated and contaminated areas.

According to the case, however, the Navy, between 1992 and 2014, “applied pressure to Tetra Tech to reduce the time and expense of the project,” relaying financial incentives with the hope of getting the work done quickly and efficiently. Among the constraints wielded by the Navy, some of Tetra Tech’s contracts had built-in budget caps, whereas others were fixed price, meaning the company would have to shoulder the expense should test results show higher-than-expected contamination levels, the suit says, saying nothing of the overall timeline in which the work was expected to take place.

“Whereas the Navy originally anticipated that it would be able to fully remediate HPNS and then sell it to the City within a handful of years, the remediation work has now been ongoing for 28 years,” the complaint reads.

Broadly, the case alleges the Navy “failed to adequately oversee and monitor” Tetra Tech’s “fraudulent testing and remediation work” in light of the overall “motivation and efforts to save time and cost” between 1997 and 2014. It was during these years, the complaint claims, that the Navy concealed from San Francisco and proposed class members the “actual extent of contamination they knew or suspected” was present at Hunters Point Naval Shipyard, as well as understated the human risk at the site.

According to the suit, Tetra Tech and the Navy’s “misrepresentations and concealment” are the reason San Francisco continued to have proposed class members work at Hunters Point Naval Shipyard amid the company’s remediation efforts. While acting as an agent of the Navy, Tetra Tech processed soil and materials it knew or suspected were contaminated and potentially dangerous to humans “without taking safety precautions” to protect those working at the shipyard, the complaint further alleges.

Per the case, the Navy and Tetra Tech’s actions and misrepresentations were a substantial factor in the health problems experienced by SFPD workers at Hunters Point, including rashes, wheezing, coughing, shortness of breath and headaches, and heightened risk of developing cancers and other diseases.

The lawsuit looks to represent all individuals employed by the San Francisco Police Department who, as a result of the Navy’s 1996 leases of the Hunters Point Naval Shipyard property to the SFPD, worked at the naval yard at any time from 1996 to the present.