A class action claims Frosted Strawberry Pop-Tarts buyers have been misled into believing the snack's filling contains only strawberries as its fruit ingredient.

The proposed class action detailed on this page was dismissed by U.S. District Judge Andrew L. Carter, Jr. on March 31, 2022.

In a 14-page order, Judge Carter granted Kellogg Sales Co.’s motion to dismiss the case because the plaintiff failed to plead that the representations on the Frosted Strawberry Pop-Tarts’ front label were materially misleading. According to the order, the court agreed with Kellogg Sales Co. in finding that the company made no materially misleading representation on the product’s label.

“Viewing the product label in context, the representations are simply not deceptive,” the judge wrote regarding the Pop-Tarts, the packaging for which features images of half of a fresh strawberry and oozing, dark red filling.

The order specifies that courts typically find representations about ingredients to be misleading when a product label explicitly asserts that the item is made with a specific ingredient or specifies the quantity of an ingredient when it is not predominant in the product. Further, the plaintiff’s amended complaint lacked allegations that the Frosted Strawberry Pop-Tarts do not taste like strawberries or do not contain strawberries in any form, the judge noted.

“The front packaging does not contain any content that would suggest to a reasonable consumer that strawberries are the sole ingredient in the Product,” the order reads.

Judge Carter ultimately denied the plaintiff’s request to amend the lawsuit for a second time, stating that the court believes that a revised case “would be futile.”

A proposed class action alleges Frosted Strawberry Pop-Tarts buyers have been misled by the product’s label into believing the snack’s filling contains only strawberries as its fruit ingredient. 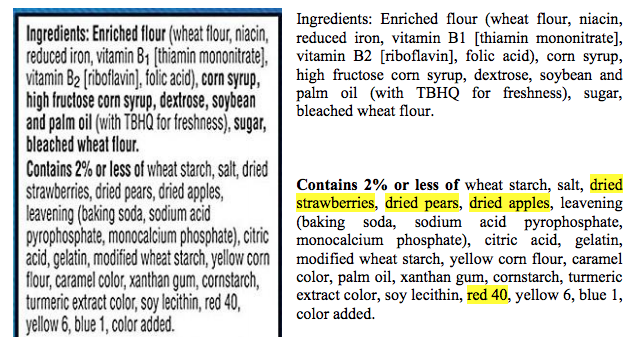 As the 11-page lawsuit out of New York tells it, consumers do not expect a food product labeled with the term “strawberry,” with no qualifying language accompanying it, to contain fruit filling ingredients other than strawberry—and especially not pears and apples as indicated within the Frosted Strawberry Pop-Tarts ingredients list.

Per the case, the front label’s non-disclosure that “frosted strawberry” Pop-Tarts include other fruit components falls short of the legal requirements set by the Food and Drug Administration (FDA) to prevent consumer deception.

In all, the complaint charges that calling defendant Kellogg Sales Company’s Pop-Tarts product “frosted strawberry” is misleading given the descriptor, under federal law governing food labeling practices, “includes or suggests the name of one [strawberries] or more but not all [pears and apples] such ingredients, even though the names of all such ingredients are stated elsewhere in the labeling.”

According to the suit, a reasonable consumer viewing the Pop-Tarts’ label would be easily misled as to the amount of strawberries, the product’s “characterizing ingredient,” contained in the snack.

“Under 21 C.F.R. § 102.5(b), strawberries are the ‘characterizing ingredient’ of the Product because their proportion has a material bearing on price and consumer acceptance.

Under 21 C.F.R. § 102.5(b), strawberries are the ‘characterizing ingredient’ of the Product because the labeling creates an erroneous impression that strawberries are present in an amount greater than is actually the case.

The Product also contains red 40, a food coloring which increases the redness of the filling, as seen on the front label.

This gives the consumer the impression that the Product contains more strawberry ingredient than it does and only contains strawberry as its fruit filling ingredient.”

The plaintiff, a Bronx County, New York resident, alleges Kellogg Sales Company’s branding and packaging of “Frosted Strawberry” Pop-Tarts “is designed to—and does—deceive, mislead, and defraud” buyers. Further, the complaint claims the defendant has been able to sell more “Frosted Strawberry” Pop-Tarts, and at higher prices, than it otherwise would have been able to absent its labeling practices.

“The value of the Product that plaintiff purchased and consumed was materially less than its value as represented by defendant,” the case argues. “Had plaintiff and class members known the truth, they would not have bought the Product or would have paid less for them.”