A Georgia resident alleges in a proposed class action lawsuit that Amazon.com, LLC “knowingly” sold defective popcorn machines manufactured in China and sold by Great Northern Popcorn while refusing to provide refunds. According to the 18-page complaint, which has been removed from superior court to Georgia’s Northern District, Amazon is “well aware” of the issue with the popcorn makers—and knows customers will “waste thousands of hours” putting the machine together—yet continues to sell “hundreds” of the nearly $300 product each week. 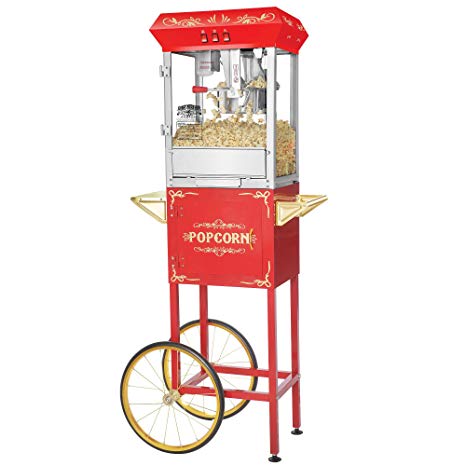 The plaintiff claims that after popcorn maker buyers spend upward of an hour assembling the nearly five-feet-tall product’s dozens of pieces, they come to learn that the “POPCORN” lettering on the door through which popcorn is removed from the machine is upside down. According to the case, while it’s easy to assume an error was made during assembly, the red rectangular box on which “POPCORN” is written comes as one piece in the box in which it’s delivered. The plaintiff contends that not only is there “no way for the customer to have caused the problem,” but there is no way for the issue to be corrected without ruining the machine.

As the plaintiff tells it, a popcorn machine, meant to be a festive addition to any gathering, with upside-down lettering simply doesn’t fly.

“It is obviously not acceptable to have upside down lettering on the primary facing of the machine—the side with the door where popcorn is removed,” the lawsuit reads.

Moreover, due to both how long assembly takes and the size of the machine itself, it is impossible for customers to return the product and be made whole again by Amazon, the case stresses, as the popcorn maker cannot be disassembled without putting in further substantial work. Arguing that it would not be possible in most cases to disassemble, repack and ship a Great Northern Popcorn Machine back to Amazon, the plaintiff claims that, in this way, “Amazon refuses to reasonably honor its promise of a full refund for this defective product.”

“Amazon has established a policy of not providing a refund for the defective product, knowing that customers will then be stuck with the assembled item because the alternative of disassembling the item, repacking it, and shipping it will only increase their harm,” the case adds.

Cited in the complaint are numerous online consumer complaints about Great Northern Popcorn Machines purchased from Amazon. The plaintiff claims the consumer complaints noted in the case are “but a few of dozens of such comments,” which, according to the lawsuit, indicates Amazon “has known about this defect for at least three years yet continues to sell the product” without offering refunds.

The lawsuit looks to cover a class of consumers across the United States who bought a defective Great Northern Popcorn Machine from Amazon within the relevant statute of limitations period.