A class action alleges Elanco Animal Health Incorporated has failed to warn pet owners of the risks linked to Seresto flea and tick collars for dogs and cats.

A proposed class action filed on April 9 alleges Bayer Healthcare LLC and Elanco Animal Health have, since at least 2012, “taken advantage of the trust that loyal pet owners” have placed in the companies by making, marketing and selling dangerous Seresto-brand flea and tick collars for dogs and cats.

The 27-page lawsuit echoes the one detailed on this page in alleging Bayer and Elanco’s product, which purports to prevent fleas and ticks by releasing small amounts of pesticide onto pets over time, causes harm that “far outweighs any benefits” the collars may offer.

“According to the Environmental Protection Agency (‘EPA’), since 2012, Seresto Collars have been responsible for over 75,000 reported incidents—including the deaths of 1,698 pets and nearly 1,000 incidents involving human harm,” the complaint says, alleging Bayer and Elanco have “refused to disclose or otherwise inform” buyers of the risks of using the collars despite knowing full well of the dangers to both pets and humans.

Per the case, Elanco and Bayer have not voluntarily recalled the Seresto collars despite being formally asked to do so by Representative Raja Krishnamoorthi, chairman of the House Subcommittee on Economic and Consumer Policy. The companies “continue to deny wrongdoing and deny[] the fact that” the collars pose serious safety risks, the lawsuit says.

The lawsuit looks to represent consumers in Florida who bought any of the products from the beginning of the applicable statute of limitations period through present day.

Elanco Animal Health Incorporated faces a proposed class action that alleges the company has failed to warn consumers of the risks associated with its Seresto flea- and tick-repellant dog and cat collars despite reports of “thousands” of pet deaths and injuries supposedly linked to the products. 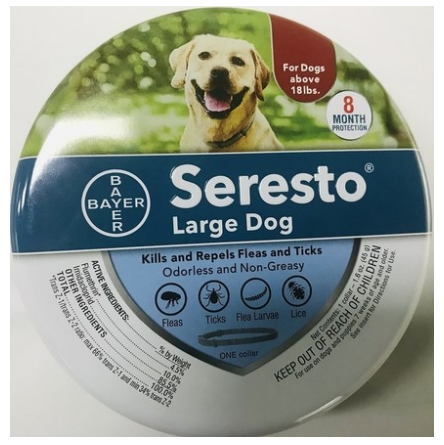 The 23-page lawsuit, citing a report from the Midwest Center for Investigative Reporting (MCIR) and USA Today, claims Elanco, an Indiana-based former subsidiary of Bayer and the “leading seller of pet collars,” has for years sold its popular Seresto collars while failing to warn consumers that their pets may experience complications ranging from skin irritation to neurological issues. Despite the significant danger posed by the products, the complaint says, no disclosure exists on the collars’ labels or packaging to inform consumers that the products “can cause severe injury and/or death in the dogs and cats who wear them and to their human caregivers.”

The suit contends that Elanco and the U.S. Environmental Protection Agency have known for some time of the dangers the flea and tick collars pose to animals and humans yet have remained mum as far as warning the public. Further, the lawsuit claims the EPA approved the Seresto collar for use “based on studies sponsored by then-owner Bayer,” the company responsible for the creation of the controversial Roundup weedkiller.

“According to MCIR’s report, the dangers posed by the Seresto collar Products have been known for years to the EPA and Elanco,” the case out of California alleges. “Nevertheless, the Seresto products continue to be sold to consumers and their four-legged companions.”

Per the lawsuit, the reality of the safety risks linked to Seresto pet collars is a far cry from the imagery of the happy, healthy dogs and cats who appear on the products’ labels. According to the March 12, 2021 MCIR report by Johnathan Hettinger, Seresto collars, which work by releasing small amounts of pesticide onto an animal for months at a time, have been linked to nearly 1,700 pet deaths and tens of thousands of animal injuries. The report, citing agency documents, says the EPA has known of the problems linked to the collars for some time yet has “done nothing to inform the public of the risks.”

Per the suit, while it’s known that flea and tick pet collars “have a history of harmful side effects,” the number and seriousness of those associated with Seresto collars “exceed anything seen previously.” The lawsuit says the EPA, between 1992 and 2008, received roughly 4,600 incident reports and 363 reported deaths connected with collars containing the active ingredient tetrachlorvinphos, a substance “linked to cancer and brain development issues in children.” On the other hand, based on MCIR’s review of EPA data, there have been upward of 75,000 incident reports, at least 1,698 pet deaths and nearly 1,000 reports of harm to animal caregivers since the introduction of Seresto collar products into the market in 2012 through June 2020, the suit states.

“On a per year basis,” the complaint says, “the incident reports for the Seresto collar Product are thirty times greater and reported deaths 10 times greater than for pet collars based on tetrachlorvinphos.”

The case poses that these numbers, however, are likely “several magnitudes less” than the total incidents involving Seresto collars. Per the complaint, Nathan Donley, an “expert on U.S. pesticide regulation and scientist with [the Center for Biological Diversity],” holds that consumers, most of the time, “are not going to make the connection or they’re not going to take an hour or so out of the day and figure out how to call and spend time on hold.”

According to the complaint, the main ingredients in Seresto collars, the pesticides imidacloprid and flumethrin, are particularly troubling as far as their use on pets. Per the case, imidacloprid is in the neonicotinoid class of insecticides, which are commonly used on crops. Neonicotinoids, the lawsuit says, citing the MCIR report, have been linked to “massive die-offs of non-target insect such as bees and butterflies,” and imidacloprid itself is banned in the European Union for outdoor use. Flumethrin, on the other hand, is only used for the purposes of the Seresto collar and, as a nervous system disruptor, can cause seizures, paralysis, hyperactivity and death, the suit says.

The lawsuit says that according to Donley, the harmful effects linked to the Seresto collar, including those experienced by pet owners, may be the result of a “reaction of active ingredients, which are unknown and have caused problems in spot-on treatments.”

The suit looks to represent all individuals in California who’ve bought a Seresto flea and tick collar for their dog or cat since March 22, 2017.