Sears, Roebuck, & Co. is among three defendants in a proposed class action lawsuit filed by a consumer who claims certain Kenmore-brand gas water heaters are defective.

“These water heaters should never have been placed in the stream of commerce,” the 32-page complaint says, alleging violations of California consumer protection law.

The lawsuit aims for the court to compel Sears and co-defendants Sears Holding Corp. and KCD IP, LLC to formally warn consumers of the alleged defect, as well as pay for replacement water heaters and property damage.

Here’s what you need to know about the allegations.

What does the lawsuit say?

According to the case, Kenmore water heaters made between 2010 and 2012 and outfitted with Honeywell WV8840 gas valves can leak. The suit claims the leaks stem from the erosion and general deterioration of the gas valves’ plastic temperature sensors. Once the gas valve starts to go, the case goes on, a pin-sized hole can form in the sensor, allowing water to leak from the heater.

The lawsuit says a water heater will continue to leak unabated until the water supply is shut off and is drained from the heater, and the sensor is replaced. The expected lifespan for a water heater’s gas valve is between six and 10 years, the case states.

But what does the lawsuit really say?

Gas water heaters come with gas valve controls mounted outside of the heater tank. This mechanism, pictured below, controls the pilot light for the gas supply and regulates the water temperature inside the heater. 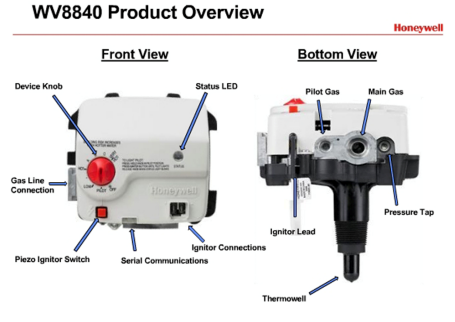 The “thermowell” right there at the bottom of the image on the right protects the gas valve’s temperature sensor, according to the case. The thermowell is made of polymeric plastic material and comes pre-installed on numerous brands of water heaters.

As this polymeric plastic is exposed to water, it begins to deteriorate, becoming thinner, more brittle and eventually eroding away to the point that water begins to leak. The images below from the complaint show gas valves that have supposedly begun to manifest the defect. Sears allegedly sold consumers Kenmore water heaters with these gas valves despite knowing they were defective.

Interestingly, the lawsuit says metal-tipped gas valves are not prone to the level of deterioration evident with plastic-tipped valves. Sears is allegedly aware of as much, as the case points out more recent models of Honeywell gas valves are manufactured with metal tips.

You learn something new every day, folks.

Was Sears aware of the defect?

That’s what the plaintiff claims. From the complaint:

Sears’ knowledge of the Defect is evident from its decision to equip [more recent] Kenmore water heaters with thermowells manufactured from metal rather than polymeric plastic to eliminate deterioration and leakage problems as described herein. Despite addressing the deterioration and leaking issues through the implementation of WT Model Gas Valves, Sears did not alert [the plaintiff] and Class Members that their Class Water Heaters contained the Defect and that these defective Class Water Heaters posed a threat of leaking, flooding, and damage to [the plaintiff’s] and Class Members’ real and personal property.”

Who is the lawsuit looking to cover?

The lawsuit looks to certify a class of consumers in California who bought a Kenmore water heater made between 2010 and 2012 that contained a Honeywell gas valve.

Remind me again how to join the lawsuit.

You don’t have to do anything in particular to join a class action lawsuit. In most cases, you will only need to take action when and if a case settles. These things usually take time, and the legal system moves at, shall we say, its own pace. Hang tight and stay informed.

The lawsuit can be read below.