The proposed class action detailed on this page was dismissed on September 30, 2022 amid questions as to why the plaintiff, who was friends with his attorney, actually bought the Snow teeth whitening product and whether he’d even seen any of the allegedly false advertisements taking center stage in the proceedings.

United States District Judge Joan M. Azrack dismissed the case after accepting Magistrate Judge Steven L. Tiscione’s recommendation that Snow Teeth Whitening LLC’s December 2021 motion to toss the case be granted. Magistrate Judge Tiscione recommended that the suit be dismissed on the grounds that the plaintiff ultimately failed to show that his financial injuries were traceable to the defendants’ alleged conduct.

In a 17-page document, the magistrate judge noted that there was some dispute over the true purpose behind the plaintiff buying the Snow teeth whitening product, as there existed “strong circumstantial evidence” that the consumer only bought the product “in order to generate this lawsuit.” Judge Tiscione stated in the document that the plaintiff has a “long-standing friendship” with his attorney, though the consumer testified during a deposition that he bought the product for the sole purpose of whitening his teeth and only sued when he became “dissatisfied” with the item.

According to the recommendation and report, the plaintiff’s lawyers sent a demand letter, which included a draft lawsuit seeking millions in damages, to the defendants complaining about the Snow teeth whitening kit on April 8, 2020, more than three months before the plaintiff bought the product at issue. The defendants told the court that when they rejected that demand, the plaintiff then bought the product in July of that year and filed suit in December 2020, “adopting his attorneys’ pre-drafted allegations as his own.”

The magistrate judge agreed with Snow Teeth Whitening in finding that the plaintiff’s testimony did not show that his alleged financial injury could be traced to the company’s advertisements. Although the man’s first amended complaint identified several allegedly false and misleading ads, his testimony contradicted those claims, showing that “he did not see or rely on any of the advertisements before purchasing the Kit.”

At the same time, the plaintiff also testified that he had seen entirely different ads for the Snow product on Facebook that were not ever identified or mentioned in his first amended complaint, the judge wrote.

Magistrate Judge Tiscione wrote that the “complete lack of any connection” between the plaintiff’s deposition testimony and the allegations in his complaint were “even more troubling” than the apparent friendship with his attorney, as the lawsuit appeared to have been drafted before the consumer even bought the product “and seemingly without any attempt to conform the allegations” in the suit to the plaintiff’s actual experience.

This “disconnect” was ultimately fatal to the plaintiff’s case, Magistrate Judge Tiscione wrote, recommending that the court toss the suit.

In her dismissal order, Judge Azrack stated that the court adopted Magistrate Judge Tiscione’s recommendation and report in its entirety.

According to the 20-page false advertising case, defendants Snow Teeth Whitening LLC, Foresold LLC, Mayweather, Gronkowski and Snow founder Joshua Elizetxe have charged consumers nearly $200 for what amount to ineffective, LED light-based at-home teeth whitening products that use nothing more than “very cheap lights” and are no different than similar items sold for much less.

The lawsuit alleges the defendants, in peddling Snow’s Accelerating LED Mouthpiece, At-Home Teeth Whitening All-in-One Kit, “Original” kit and other wired teeth whitening light devices, have engaged in a “wide-spread fraudulent scheme to deceive consumers” and “demonstrate[d] greed and a complete disregard for human decency” by suggesting the products could protect against COVID-19.

“While defendants unequivocally claim that their teeth whitening light delivers amazing results, independent lab testing proves that, in fact, their light does nothing to enhance their product’s purported ability to whiten teeth,” the lawsuit, filed in New York’s Eastern District Court, claims. 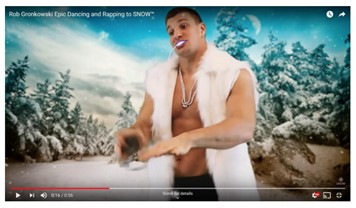 The lawsuit chides the defendants for claiming that Snow’s teeth whitening serum is proprietary when, in truth, “there is nothing proprietary about it” given it’s “simply a mix of two types of peroxide, hydrogen and carbomide [sic].”

Further, the complaint condemns the defendants for “absurdly claim[ing]” that Snow products cause no teeth sensitivity despite selling an add-on made specifically for sensitive teeth, called the “desensitizing gum,” to reduce sensitivity that may result from using the teeth whitening lights. As far as how fast Snow teeth whitening lights supposedly work, the lawsuit, citing independent lab testing, says the defendants’ claims that users will see results within three days are false:

In October 2019 on trysnow.com, Defendants claimed that the All-in-One Kit has a patent-pending LED mouthpiece that accelerates the teeth whitening process.

Put differently, independent lab testing revealed that Defendants are lying to consumers by suggesting that their expensive light will accelerate whitening results, when in fact it does no such thing.”

The case goes on to say Elizetxe “lied to the viewing public” when he appeared on the Home Shopping Network in November 2019 and claimed the Snow serum contained a photo-catalyst, an ingredient that accelerates teeth whitening when exposed to light by breaking down peroxide faster. This claim is also false, the lawsuit says, given the stated ingredients for the Snow teeth whitening serum sold on HSN do not include any photo-catalyst.

According to the suit, the defendants have not spent nearly as much time or money—“3 years and over $2.3 million in Research & Development”—on the Snow teeth whitening products as they claim. Further, no clinical trials exist to back up the defendants’ statements, and Snow’s founder, Elizetxe, doesn’t even use the products himself, the case alleges.

“Elizetxe falsely claims that his white teeth are the result of using Defendants’ products, but he has veneers, a fact he hides from consumers,” the suit says.

The lawsuit relays that Snow teeth whitening products have also been peddled to consumers alongside questionable suggestions that different colored LED lights can aid in fighting germs. Per the complaint, one of the defendants’ advertisements falsely suggests that a blue LED light and hydrogen peroxide will protect Snow users from germs and bacteria, while another ad, referencing quarantine, suggests that a red LED light “option” will prevent infection. There are no studies, however, that suggest “an overpriced blue or red led light materially improve the antiseptic qualities of hydrogen peroxide,” the suit says, adding that the defendants’ ads and public statements certainly “do not cite to any.”

Further, the defendants have also fraudulently claimed that their wired teeth whitening light, the kind seen in promotional ads featuring Gronkowski and Mayweather, is patented or patent-pending and approved by the FDA, the suit asserts.

The FDA, however, has never approved any of the defendants’ products, the lawsuit says. At any rate, cosmetic products, such as those that whiten teeth, are not even subject to FDA approval, according to the case.

After ad industry watchdog TruthInAdvertising.org published an article in June 2019 criticizing Snow for using the FDA logo, the company allegedly “began to conceal" the icon in its advertisements and social media posts.

In addition to making false statements regarding FDA approval, the defendants are also accused of having “fabricated” awards and accolades from well-known publications. As the lawsuit tells it, the falsehoods spread by the defendants could benefit from more than a little fact checking:

Their lies are so brazen they falsely claimed to have customers in over 200 countries around the world, yet there are not even 200 countries in the world.”

With regard to the apparent popularity of Snow teeth whitening products, the lawsuit says that while the defendants claim to have “500,000 happy customers and 16,000 five star reviews,” their rating on the Home Shopping Network is “only 2.7 out of five.” In general, the defendants have chosen to downplay the fact that their teeth whitening products have performed poorly in the court of public opinion, the complaint alleges.

“Defendants have not disclosed the number of unhappy customers such as the Plaintiff,” the suit reads, contending that similar products offered by competitors, which tend to retail for less than $50 per kit, are far more popular.

“Consumers could purchase whitening strips or whitening pens from numerous competitors for under $50, even under $40 or $30,” the suit says. “Thus, Defendants are charging consumers $100 more than arguably comparable products for a light that does nothing with respect to teeth whitening.”

What if I bought the products and don’t live in New York?

If you’re not a New York resident, you may not be entirely out of luck. It’s possible that lawsuits centered on similar claims may be filed in other states and look to represent Snow teeth whitening product buyers outside of New York.

If that happens, we’ll update this post. Be sure to check back for developments.

In the meantime, sign up for ClassAction.org’s free weekly newsletter here.

In general, there’s nothing you need to do to join or be considered a part of a class action lawsuit. It’s only if and when a case settles that consumers would need to take action. You can learn more about it here.