It’s always a good idea to be a bit skeptical when someone asks for your personal information over the phone, especially when you aren’t exactly sure who’s asking for it. It may not be a scam in the end, but you could still end up paying for something you don’t really need.

Ty, That’s Obvious. What Are You Getting At?

In the past few weeks, we’ve heard from a handful of you about phone calls that are being placed claiming to be about the lawsuits filed against Navient. Several concerns about the legitimacy of said calls have been voiced in the comment sections of our site. You may have even received a text that looks like this: 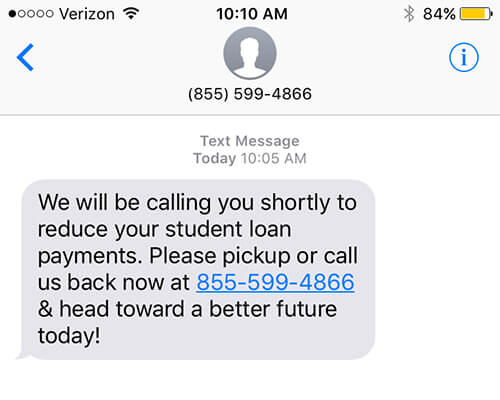 Last week, one concerned user provided us with a phone number (718-450-9492) in an email asking if ClassAction.org was making the calls (we aren’t), so we decided to give the number a call (well, a few calls) to see if we could get to the bottom of things.

Our initial call was fairly straightforward. After pressing ‘1’ to continue after a brief recorded message, a woman on the other end asked if we were calling about the loan forgiveness program. Our Marketing Director told them that he was from ClassAction.org, that some of our users had been getting calls from their number, and that he was trying to find out who they were and what the calls were about.

They immediately hung up.

The Second and Third Calls

After that admittedly suspicious interaction, a fellow writer and I decided to place the next calls ourselves. After the automated message, I was connected with the same woman our Marketing Director spoke with, only this time when asked if I was calling about the loan forgiveness program, I told them that I was. Before things went too far I mentioned that I would like a little more information before proceeding. They hung up again.

My fellow writer had a similar experience. He was hung up on after he said he thought the number was related to the ongoing litigation – as implied by the pre-recorded message that said: “You may be qualified to claim compensation from the Navient class action lawsuit.”

Not much to go on, but it added a couple more pieces to the puzzle.

For this call, I sat down with my editor who had prepared an alias and other fake information in the event she was asked some questions she wasn’t about to answer with her legitimate information. We wanted to see how far down the rabbit hole we could go.

We ended up on the line with a man this time and our editor answered some routine questions like:

After that whole song and dance, he said that she could apply for loan forgiveness because of the 2007 William D. Ford Act. It wasn’t what we were expecting to hear, but it checks out.

The William D. Ford Act isn’t something made up to add some credibility to the calls. It’s an actual Act that allowed the establishment of the William D. Ford Federal Direct Loan Program, a program that allows people with student loans to either make payments based on their income (instead of interest) or have their loans forgiven altogether.

From what we’ve seen, we can assume that these calls are coming from a third-party company willing to sign you up for a loan forgiveness program in exchange for a service fee.

So, Does That Mean the Calls Are Legitimate?

When it comes down to it, this isn’t necessarily a scam – but it could be a blatant rip-off.

There are programs in place to help borrowers with their student loans, but you can sign up for free in most cases. What a handful of third-parties seem to be doing is saying that they can consolidate your loans, offer loan forgiveness or lower payments – in exchange for a fee.

In some cases, they sign you up for a program you could have signed up for without paying a dime. Other times, they set your loan on forbearance for years so you don’t have to make payments, but the amount you owe stays the same. Neither option puts you in a great situation.

For more information about these types of tactics and how to spot them, this is the most concise resource we’ve found. It’s definitely worth the read.

Loan forgiveness scams are a thing. It’s unfortunate, but there are companies out there who are looking to take advantage of people who may already be in a desperate spot. Our best interpretation of what we’ve seen is that this is simply a third-party company looking to take advantage of all the news flying around about Navient – and the litigation against the company.

There are calls being placed from other numbers too (one of our writers got one from 855-599-4866), claiming that the Navient class action has settled and that the loan forgiveness they are offering is part of that settlement. This is a lie. The class action litigation against Navient is still ongoing and we haven’t heard any talk about a settlement just yet.

If you need help with your student loans, there are resources out there that are meant to help. By all means, check out StudentLoans.gov or other reliable sources. This post wasn’t meant to scare anyone out of getting the help they need, it was intended to help sift through the nonsense that is undeniably out there.

We’ll be sure to keep updating our site with any more information we get about the Navient suits, especially if we hear about a potential settlement. In the meantime, stay safe out there.