At least 87 kinds of Samsung gas and electric ranges equipped with certain temperature sensors are defective in that they are unable to cook food as intended, a proposed class action claims.

According to the 44-page complaint, Samsung ranges with a temperature sensor bearing the model number DG32-00002B are plagued by a “latent defect” that causes circuitry failure in the product’s control board. When the control board fails, the suit says, the ranges’ oven and burner temperatures will deviate from what’s been selected for cooking.

“The Class Ranges’ ovens and burners are either not hot enough or far too hot, posing a safety risk,” the lawsuit, filed December 9 in New Jersey federal court, reads. “The Defect renders the Class Ranges unable to cook food as the consumer intended.”

More specifically, the alleged defect causes cooking times to be “greatly extended” and forces users to constantly monitor their food to keep it from unexpectedly burning or catching fire, the suit says.

The lawsuit alleges defendant Samsung Electronics America has “long been aware” of the temperature sensor defect, as the company performs reliability testing on its appliances before they’re released to the public, but has not yet disclosed the problem to consumers. In fact, Samsung has “repeatedly dismissed” the presence of any defect and continues to blame the problem on consumer error, despite posting a page dedicated to temperature control issues on its website, according to the suit.

Cooking 101, or why properly working temperature sensors are crucial

When a user sets their oven to a certain temperature, the control board is supposed to send electrical signals to turn on the oven’s heat supply, which should be followed by the control board turning the heat supply on or off based on changes in electrical resistance to maintain the set temperature, the complaint says. According to the lawsuit, however, the temperature sensor defect renders certain Samsung ovens unable to correctly regulate resistance in the circuits linked to the control board. Variations in resistance can degrade the conducting materials, cause delays in signal transmission and, over time, lead to circuit failure, the suit says.

Thus, when the sensor fails, it not only causes a discrepancy between the oven’s actual and set temperature, but it also causes circuit failure in the control board.”

As the lawsuit tells it, temperature control problems occurring inside the oven can also affect the range burners as both work off the same control board. Circuit failure, according to the suit, can cause the actual temperature of a burner to differ from the temperature selected by a consumer, posing a significant safety risk.

“Failure of the oven and burner can happen simultaneously or separately,” according to the lawsuit.

Samsung represents its gas and electric ranges as “intelligently built” and easy to use thanks to “functions that have been specifically designed to maximize convenience for consumers.” The lawsuit argues otherwise, however, given the problems the alleged defect can cause users who require reliable and consistent heating when cooking at home. And when someone seeks to repair the alleged defect in their Samsung ranges? They often find themselves out of luck, the lawsuit says.

Specifically, the case alleges defects with the materials and workmanship of the temperature sensors are pervasive to the extent that a repaired Samsung range is “substantially certain” to fail again because Samsung and its authorized technicians will “fix” the ranges with the same defective parts. According to the suit, field techs have observed temperature sensor failures at a high rate, with one reportedly remarking that consumers “were not the problem with the sensors”:

Which models of Samsung ranges does the suit say are defective?

According to the lawsuit, the Samsung ranges hampered by the temperature sensor defect include at least the following model numbers: 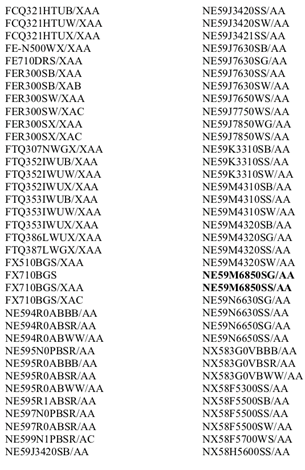 Samsung continues to sell ranges with the bolded model numbers listed above, the suit says.

The case looks to represent all consumers who bought, other than for resale, a Samsung range containing a temperature sensor bearing the model number DG32-00002B from the defendant or its authorized retailers in the U.S. between January 1, 2016 and the present.

In addition to a nationwide group of consumers, the suit proposes to cover a class of Samsung range buyers in Florida who fit the criteria detailed above.

We’ll update this page with any developments. In the meantime, you can sign up for our free newsletter here.