[UPDATE: On April 10, 2018, U.S. District Judge James Lawrence King dismissed an amended complaint filed by the plaintiff after her initial case was dismissed without prejudice in February. Dismantling the plaintiff’s revised argument, Judge King’s order this week found that Royal Caribbean’s class action waiver was enforceable, reasonably communicated, and conscionable, thereby ruling that the plaintiff’s case could not proceed as a class action. The judge stated, however, that claims could still be brought in an individual capacity. The plaintiff has been given 20 days to file another amended complaint. The dismissal order can be read here.]

[UPDATE: The lawsuit detailed on this page was dismissed without prejudice by U.S. District Judge James Lawrence King on February 7, 2018. Judge King's order granting the dismissal can be read here.]

Royal Caribbean Cruises Ltd. is the defendant in a proposed class action lawsuit filed in Florida that alleges the cruise line, rather than cancel or modify an August 27 voyage aboard the Liberty of the Seas to depart from the Port of Galveston en route Mexico, instead effectively forced ticketholders to fly to Texas while it was in a state of emergency due to Hurricane Harvey or risk losing the entire fare paid for the trip.

“Consequently, hundreds of passengers were subjected to days of danger, terror, and trauma as a result of being forced to travel into the path of a category 4 hurricane,” the 20-page lawsuit alleges. “These passengers were strong armed into traveling to Houston based on [Royal Caribbean’s] assurances that safety was the primary concern and the voyage would sail as scheduled; combined with [Royal Caribbean] repeatedly advising passengers that if they cancelled they would lose the entire cost of the purchased cruise.”

The plaintiff, a Canadian resident, claims that Royal Caribbean’s alleged decision to not cancel the cruise, as well as reportedly not offer any refund on the cost of tickets for the August 27 through September 3 trip, until the last possible moment subjected passengers to catastrophic flooding and potential loss of life while the Category 4 storm raged on.

The complaint outright alleges Royal Caribbean’s “reckless” conduct during Hurricane Harvey was motivated by profit because, per the language in the complaint, “cruise lines like [Royal Caribbean] make no money when passengers don’t sail.”

The lawsuit starts off by detailing a notice allegedly shared online Thursday, August 24, by Royal Caribbean containing information for passengers set to travel on the Liberty of the Seas that Sunday:

“Hello, this is Royal Caribbean International. We would like to provide you with important information regarding your Sunday, August 27, sailing onboard Liberty of the Seas.

We are actively monitoring path and progression of Hurricane Harvey. At this time, Liberty of the Seas will keep her original schedule for Sunday’s turnaround in Galveston, Texas. Should we make any changes to Liberty of the Seas itinerary, we will make sure to inform our guests and travel partners.

Royal Caribbean will provide you with an update tomorrow by 12:00 PM EST. We appreciate your understanding and cooperation.”

By the next day, Friday, August 25, Hurricane Harvey had bulked up to a Category 2 storm, the complaint reads, noting that at 6:30 am that day all flights to and from Corpus Christi, Texas were canceled. By noon, the lawsuit continues, the Port of Galveston, from which the Liberty of the Seas was to depart, closed to all vessels and set the port condition at “Zulu,” thereby suspending all waterfront operations.

“Hello, this is Royal Caribbean International. We would like to provide you with important information regarding your Sunday, August 27th, sailing onboard Liberty of the Seas.

We are actively monitoring path and progression of Hurricane Harvey. At this time, Liberty of the Seas will keep her original schedule for Sunday’s turnaround in Galveston, Texas. Should we make any changes to Liberty of the Seas itinerary, we will make sure to inform our guests and travel partners.

Royal Caribbean will provide you with an update tomorrow by 12:00 PM CT. We appreciate your understanding and cooperation.”

According to the complaint, by 5:00 pm on August 25, Carnival Cruise Lines had already rerouted two of its ships set to arrive in Galveston the following day, with another ship staying an additional night in Cozumel to accommodate the schedule changes. While this was going on, the lawsuit notes, the National Hurricane Center reportedly advised that the entire Texas coastline was in the “cone of danger” for the hurricane. 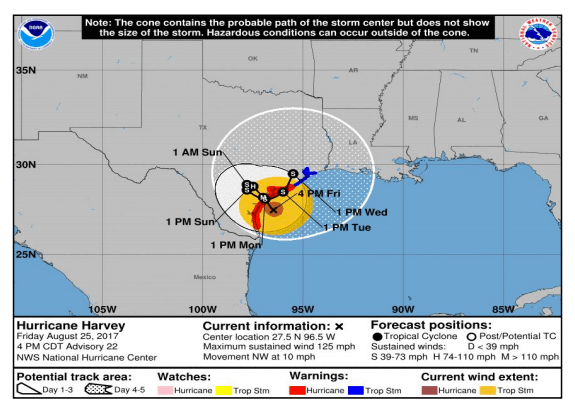 On Saturday night, August 26, after biblical flooding had already begun, Royal Caribbean allegedly relayed the following email to passengers notifying them of its intention to “find a way to make the scheduled sailing”:

“This is Royal Caribbean International with important information regarding your sailing onboard Liberty of the Seas. Due to Tropical Storm Harvey and weather conditions around the Galveston/Houston area, as well as the port’s current closure, Liberty of the Seas will arrive to the Port of Galveston later than originally scheduled. Because of this, boarding for your cruise will now take place on Monday, August 28 between noon and 3 p.m. We ask that guests not arrive to the port before noon.”

The lawsuit asserts that rather than cancel the cruise, and despite the Port of Galveston showing no sign of reopening, Royal Caribbean intended to merely push back the sailing roughly 24 hours.

The above-detailed allegations notwithstanding, the lawsuit perhaps takes greatest issue with Royal Caribbean’s alleged decision to wait until August 27, the day the Liberty of the Seas was to sail, to offer passengers the opportunity to reschedule their trips and receive credit for a future cruise. That it had gotten to that point, the complaint alleges, effectively put passengers in danger of serious harm or death.

“Prior to this, again, all of the passengers were effectively forced to travel to South Texas unless they wanted to forfeit then entirety of what they paid for the cruise,” the lawsuit summarizes, supposing that had the cruise been canceled just a day or two earlier, passengers would not have been put in jeopardy. “As such, it was simply too late for these passengers to avoid being trapped in the path of Hurricane Harvey.”

Around 3:00 pm on August 27, Royal Caribbean finally canceled the cruise, the case says.

Allegation: “Five to Six Days of Being Trapped”

The lawsuit rounds out by admonishing Royal Caribbean, alleging the company negligently subjected passengers who flew to Texas for the canceled August 27 voyage to “five to six days of being trapped in a state of emergency, often without power, limited food and water, and at all times … at risk of death.” By the time the cruise was canceled, the case says, Hurricane Harvey had already made multiple landfalls in the state, and shut down airports and major roadways due to immense flooding.

Who is covered by this lawsuit?

The proposed class named by the lawsuit includes all passengers aboard the Liberty of the Seas who travelled to the Galveston, Texas area during Hurricane Harvey.