Tesla Model S and Model X vehicles manufactured between September 2013 and October 2018 are plagued by at least one latent defect that can cause front and rear suspension control arm assembly components to prematurely loosen, wear, crack and/or break and cause a driver to lose steering control during operation, a proposed class action alleges.

The hefty 101-page lawsuit, of which nearly 70 pages are dedicated to complaints submitted to the National Highway Traffic Safety Administration (NHTSA), alleges the Tesla suspension defect poses an unreasonable crash risk and directly hampers consumers’ ability to safely use and enjoy their vehicles.

“Numerous owners and lessees of the Class Vehicles have experienced the Suspension Defect already, and Tesla is gambling with the lives and safety of hundreds of thousands of additional drivers and passengers whose vehicles suspension parts [are] at an imminent risk of failure,” the case, filed in California federal court on November 20, claims.

According to the lawsuit, Tesla has “actively concealed” the suspension defect from both customers and regulators given that disclosing the problem would reduce affected Model S and Model Xs’ intrinsic and resale value, not to mention lead drivers to demand immediate and expensive repairs.

Despite an October 2020 recall by the China State Administration for Market Regulation (SAMR) and more than one technical service bulletin from the tech-company-slash-automaker since 2015, Tesla has refused to truly acknowledge and disclose the suspension defect as Model S and Model X owners continue to face an “unreasonable risk of suffering serious bodily injury or death,” the suit says.

Notwithstanding Tesla’s positioning as a technology company, its “cultlike” fandom, and CEO Elon Musk’s hordes of social media followers, the automaker and its chief officer still have a responsibility to drivers who rely on the safe operation of their vehicles, the complaint avers:

But despite Tesla and its executive’s stardom, the reality is that Tesla is that Tesla [sic] is a car company. It puts thousands of Class Vehicles on the road, all of which are regulated by safety standards and laws that require Tesla to inform the public—not only its current customers—of safety defects in those vehicles. Tesla’s misleading public statements and denial of the Suspension Defect directly undermines its duties to public and must be remedied.”

Tell me more about the alleged suspension defect.

As the lawsuit tells it, the Tesla suspension defect can manifest without warning and cause a sudden and unexpected loss of steering control while a vehicle is in use. When the defect manifests, the complaint says, a Tesla’s rear or front control arms can separate from the steering knuckle, causing excessive negative camber—the angle of a vehicle’s wheels, measured in degrees, when viewed from the front of the car—in the suspension. 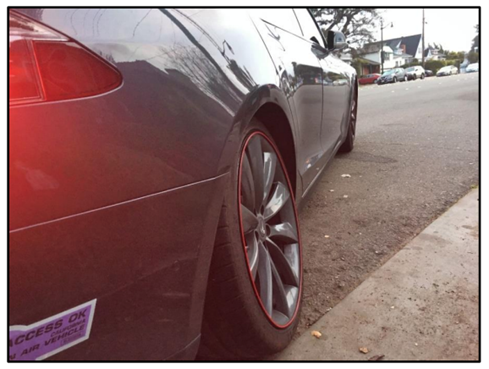 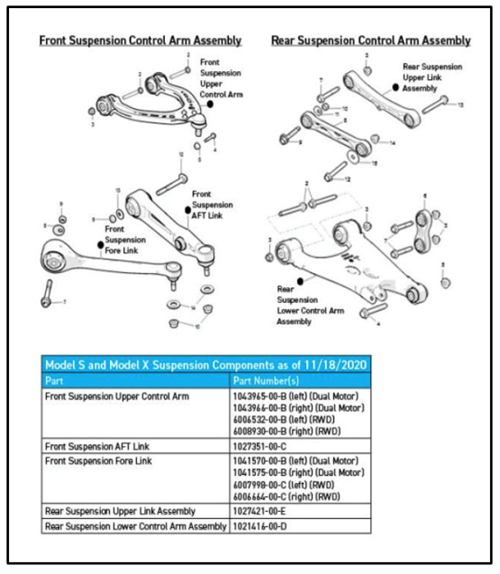 Upon information and belief, the front and rear suspension control arm assemblies in the Tesla Model S and Model X are identical, the suit states, indicating the defect equally affects those vehicle models.

On October 22, 2020, the China State Administration for Market Regulation (SAMR) announced that it would recall approximately 40,000 Tesla Model S and Model X vehicles made at the defendant’s Fremont, California facility between September 13, 2013 and October 15, 2018, the lawsuit says. In its press release announcing the recall, SAMR reportedly detailed the findings of an investigation into the apparent suspension defect, relaying in part:

When some of [the] vehicles within the scope of the recall are subjected to a large external impact, the ball studs of the rear connecting rod of the front suspension will have initial cracks. The cracks may extend and cause the ball studs to break when the vehicle continues to be used. In extreme cases, the ball-end cone seat may come out of the steering knuckle, affecting the control of the vehicle, increasing the risk of accidents, and posing safety risks.

When some vehicles within the scope of this recall are subjected to a large external impact, the upper connecting rod of the rear suspension may be deformed. When the vehicle is continued to be used, the component will be further weakened. In extreme cases, it may break and affect the control of the vehicle. Increase the risk of accidents, and there are hidden safety hazards.”

Despite China’s recall, Tesla decided to take “a difference stance” in the U.S., blaming the issues cited in SAMR’s press release on “driver abuse,” the complaint says. In a communication with the NHTSA, Tesla’s corporate counsel reportedly contended that “driver usage and expectation for damageability is uniquely severe in the China Market,” and asserted that curb impact, potholes and other types of “abuse” can damage suspension parts, per the lawsuit.

“It’s not the crime, it’s the coverup”: Tesla’s alleged “active concealment” of the problem

The lawsuit argues Tesla’s “willingness to blame drivers” for the suspension issue is unsurprising given the automaker has “been instructing its service center technicians to conclude that snapped suspension arms are indicative of driver abuse, not a defect.”

Further, the suit mentions that reports began to circulate online around 2016 that Tesla was requiring customers to sign non-disclosure agreements in exchange for “goodwill repairs” to failed suspension components. Tesla ended this practice after the NHTSA exerted “significant pressure,” yet the NDAs had their desired effect of suppressing the overall number of driver complaints submitted to the safety agency, the suit says.

The case alleges Tesla has indeed gone to “great lengths” to hide its knowledge of the apparent suspension defect. Rather than issue a recall in the U.S., Tesla has instead sent out three technical service bulletins to address customer complaints and sidestep the financial ramifications that would ensue from a mass recall, the lawsuit contends. In truth, Tesla’s technical service bulletins, issued in “piecemeal fashion” in 2015, 2017 and 2019, serve to downplay the dangerousness of the suspension defect while the company worked behind closed doors to try to remedy the problem.

More from the complaint:

On information and belief, Tesla issued each of the TSBs above in a piecemeal fashion to avoid an all-out recall of the Class Vehicles. On further information and belief, Tesla has silently redesigned and strengthened the suspension components subject to failure as a result of the Suspension Defect but has failed to inform Plaintiff and the Class of these. Moreover, despite having the parts necessary to correct the Suspension Defect, Tesla continues to conceal such information from prospective purchasers of its vehicles and existing Class Vehicles owners. Indeed, this is evident from Plaintiff’s own experience.”

In essence, the case says, Tesla is “attempting to fight a public relations battle to keep consumers and the public in the dark” while at the same time trying to placate those who experienced the issue and brought their Model S and Model X vehicles in for service.

How do I join this lawsuit?

There’s generally nothing you have to do to join or be considered part of a class action lawsuit. Class action cases almost always take time to work their way through the legal system, usually toward either a settlement or dismissal, and it can take a while before the time comes for consumers to file claims for compensation approved by a judge.

The breach-of-contract and false advertising lawsuit, which alleges violations of California consumer protection statutes and the federal Magnuson-Moss Warranty Act, can be found below.