A proposed class action filed on August 7th in Rhode Island claims CVS Health Corporation, with help from several large pharmacy benefit managers, is behind a scheme by which it overcharges insured customers for generic drugs. The lawsuit alleges CVS’ conduct violates the federal Racketeer Influenced Corrupt Organizations Act (RICO), as well as the Employee Retirement Income Security Act (ERISA), as the company controls the assets of health plan enrollees and therefore has a fiduciary duty to those individuals.

And wasn’t a similar suit against CVS in the news earlier this year?

Also correct. That lawsuit, which was filed back in 2015, was not certified as a class action by a federal judge, a hurdle that derails many class actions before they can get off the ground. Though she dismissed the lawsuit, Judge Yvonne Gonzalez Rogers, of the U.S. District Court for the Northern District of California, allowed the plaintiffs to amend their motion for certification.

According to the lawsuit, CVS deliberately overcharges customers who use their insurance plans to purchase certain drugs, referred to in the complaint as “affected drugs,” as opposed to those who pay cash or are uninsured. To explain how this element of the alleged conspiracy works, the complaint outlines the plaintiff’s apparent situation.

In early July 2017, the plaintiff reportedly used her Anthem Blue Cross insurance to buy a certain generic drug for $165.68. If she paid in cash without using her insurance, however, the case says the drug would’ve cost the woman only $92. The lawsuit claims CVS never disclosed to the plaintiff that buying the generic in cash would’ve allowed her to pay 45 percent less, further claiming the company instead chose to stay quiet since it knew “full well that no reasonable consumer would make such a choice.”

Some Information from the Case on Pharmacy Benefit Managers

The largest pharmacy benefit managers in the country are Express Scripts, CVS Caremark (which CVS owns), and OptumRX, Inc. These three companies manage the drug benefits for roughly 75 percent of the market, the lawsuit says, which amounts to an estimated 180 million people.

At the end of the day, this arrangement makes CVS eager to make deals with pharmacy benefit managers that will drive more people to CVS stores “where customers often purchase more than their generic drugs,” the lawsuit alleges. As for the deals themselves between CVS and pharmacy benefit managers, the lawsuit asserts such agreements are solidified in “secret, undisclosed contracts” wherein CVS allegedly agreed to charge and collect specific amounts from insured customers.

“The linchpin of the scheme is that the consumer pays the amount negotiated between the [pharmacy benefit manager] and CVS even if that amount exceeds the price of the drug without insurance,” the complaint reads.

Got all that? OK, moving on.

Part two of the alleged scam the case details involves CVS’ practice of overcharging customers by collecting co-pays that “exceed the pharmacists’ price and profit.” These funds, the case continues, are then kicked back up to pharmacy benefit managers in the form of “clawback” or spread payments.

The complaint includes the below diagram detailing how money is allegedly clawed back up to pharmacy benefit managers. 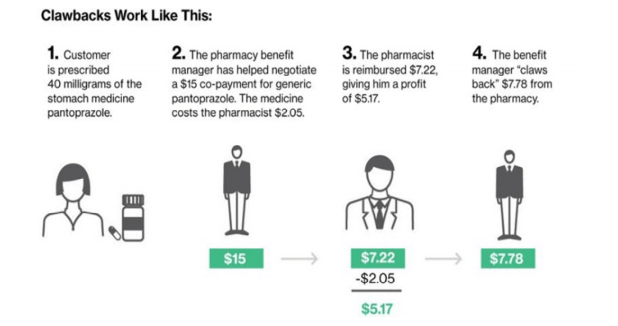 The lawsuit then provides another example of a situation involving the plaintiff wherein the woman reportedly paid $101.49 for a generic for which the cash price was only $49.45.

“[The plaintiff], as would any reasonable consumer, assumed that her insurance company would be paying approximately $400 if $101.49 was a standard 20 percent co-pay,” the case details. “Not so. Her insurance company paid less than her entire payment as a result of the secret agreements between the [pharmacy benefit managers] and CVS.”

An alleged breach of fiduciary duties under ERISA

After detailing how CVS allegedly works with pharmacy benefit managers to keep the blindfold over customers’ eyes regarding questionable generic drug pricing, the complaint goes on to allege CVS, as a controller of health insurance enrollees’ assets, has breached its fiduciary duty to those individuals under the Employee Retirement Income Security Act of 1974 (ERISA). The case argues CVS, as a fiduciary, must provide services solely in the interest of health plan participants and beneficiaries, an obligation the company allegedly directly violates with the above-described schemes.

So, what’s the bottom line with all of this?

At the end of the day, the lawsuit argues CVS lied to customers like the plaintiff about offering the lowest prices for generic drugs, all for the sake of profit. Although it promotes itself as a scion of commitment to customers’ health and well-being, CVS’s alleged non-disclosure of what goes on behind the scenes when it comes to pricing generic drugs stands in stark contrast to the company’s public positioning and claims that “when it comes to health care, there’s a clear connection between convenience, access and outcomes,” the lawsuit reads.

“All persons or entities in the United States who, as of August 7, 2017, were participants in or beneficiaries of or insured under a health benefit plan administered by a Pharmacy Benefit Manager, and who bought prescription drugs from CVS pursuant to such a plan for a higher price than the amount owed to the pharmacy.”

“All persons or entities in the United States who, as of August 7, 2017, were participants in or beneficiaries of or insured under a health benefit plan subject to ERISA and administered by a Pharmacy Benefit Manager, and who bought prescription drugs from CVS pursuant to such plan for a higher price than the amount owed to the pharmacy.”

“All persons or entities in the state of California who, as of August 7, 2017, were participants in or beneficiaries of or insured under a health benefit plan administered by a Pharmacy Benefit Manager, and who bought prescription drugs from CVS pursuant to such plan for a higher price than the amount owed to the pharmacy.”

How do I join?

In almost every case, you don’t need to do anything to be a part of a class action lawsuit like this one. (Learn more here.) There’s still quite a few hurdles this case has to jump through before it can proceed as a bona fide class action, though. Hang tight, and we’ll keep you updated when any news rolls in.