The claims detailed on this page were dismissed after a federal judge found that the representations on the TRESemmé Keratin Smooth shampoos were not likely to mislead a reasonable consumer.

In a December 28, 2022 order, U.S. District Judge Gary Feinerman wrote that although the products’ front labels include various statements about the quality of the shampoo, none of those statements suggest the absence of formaldehyde “or relate to safety in any way.” Moreover, the plaintiffs do not allege that the “gently cleanse” statement on the products’ back label would be interpreted by reasonable consumers to mean that the shampoo does not contain DMDM hydantoin or presents a risk of formaldehyde exposure, the judge wrote.

According to the order, although the plaintiffs argued that statements on Unilever’s website represented that the Keratin Smooth products were safe, the complaint does not allege that they read the website prior to purchasing the shampoo.

The judge further found that the plaintiffs had failed to allege that they were deceived by Unilever’s failure to disclose the presence of DMDM hydantoin in the shampoo as the chemical is listed among the products’ ingredients.

“Thus, Plaintiffs fail to allege that Unilever’s product labeling or marketing was deceptive as to the presence of DMDM hydantoin in the products,” the order stated.

The lawsuit initially detailed on this page, to which the New Jersey plaintiff in the second lawsuit was added, has been dismissed with prejudice.

Echoing the allegations in the suit detailed on this page, the case claims the TRESemmé Keratin line of shampoos contain DMDM hydantoin, a preservative that leaches formaldehyde when it comes into contact with water. Per the suit, formaldehyde is a well-known human carcinogen that can cause harmful reactions when absorbed into the skin. The case claims the use of DMDM hydantoin in the TRESemmé products is an “entirely unnecessary risk” given safer alternatives exist.

The plaintiff says that after using the defendant’s products, she experienced “several large bald spots and significant hair loss,” as well as scalp irritation that would begin moments after she began washing her hair.

The suit looks to cover anyone in the U.S. who purchased the TRESemmé Keratin products, with a proposed subclass of those who did so in New Jersey.

A proposed class action filed this week claims the makers of the TRESemmé Keratin Smooth line of shampoos failed to warn users that an ingredient in the products can cause significant hair loss and scalp irritation.

According to the 49-page case, TRESemmé Keratin Hair Smoothing Shampoo and TRESemmé Keratin Smooth Color Shampoo, made by defendants Unilever United States, Inc. and Conopco, Inc., contain a preservative called DMDM hydantoin, which is known to leach formaldehyde when it comes into contact with water. 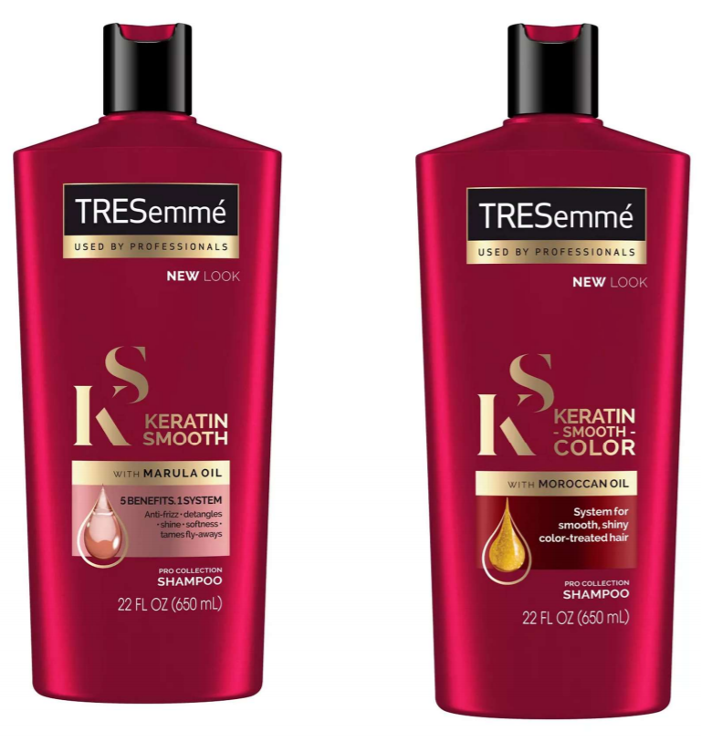 Given formaldehyde is a “well-known human carcinogen” that can cause cancer and other harmful reactions when absorbed into the skin, Unilever’s use of DMDM hydantoin in the TRESemmé Keratin Smooth products is “an entirely unnecessary risk” since safer and natural alternatives exist, the lawsuit argues.

Nevertheless, the suit alleges, the defendants have failed to properly warn consumers of the risks associated with using such a strong chemical on their hair and have even gone so far as to claim the TRESemmé Keratin Smooth products are safe.

The lawsuit alleges Unilever marketed its “Keratin Smooth” line of shampoos to women who “wanted smooth, shiny, manageable hair with no frizz.”

Through online marketing and the products’ labeling, the defendants allegedly represented that the TRESemmé products contained keratin, a protein found naturally in hair, and would “deeply nourish,” “gently cleanse,” and “repair hair.”

According to the case, however, Unilever failed to warn consumers that a preservative named among the products’ ingredients has been known by the defendants to cause or contribute to hair loss and scalp irritation. 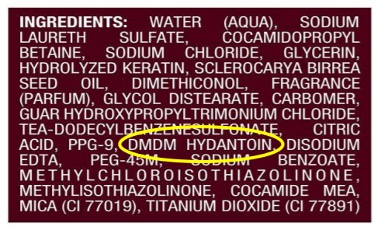 The suit charges that nowhere on the products’ packaging or in advertising did Unilever warn customers of the risks of using DMDM hydantoin on their hair and scalp and instead claimed the shampoo was safe when properly applied.

The lawsuit explains that DMDM hydantoin is a formaldehyde donor, which is a class of preservatives added to water-containing cosmetics to prevent the growth of microorganisms through the release of small amounts of formaldehyde. According to the case, the defendants until recently used the chemical in their TRESemmé Keratin Smooth line since keratin is a protein—i.e., a food for microbes—and has a limited shelf life.

Per the complaint, the use of formaldehyde donors, and particularly DMDM hydantoin, in cosmetic products has been linked to the development of allergies, dermatitis, hair loss and even cancer. The U.S. Food and Drug Administration, the suit says, considers DMDM hydantoin to be one of the top allergens “that cause the most allergic reactions from the use of cosmetic products,” especially since individuals can become more sensitive to the irritant over time. The case adds that irritation of the scalp is linked to hair brittleness and hair loss.

According to the suit, Unilever has known of the dangers associated with DMDM hydantoin for a decade or more given the chemical and several other ingredients were the subject of prior litigation against the company. Per the case, Unilever’s Suave Keratin Infusion product, which was advertised as formaldehyde-free, was recalled in 2012 following complaints of hair loss and scalp irritation. The lawsuit initiated against the company resulted in a $10.2 million settlement that was upheld by an appeals court in 2016, the suit says.

Though Unilever continued using DMDM hydantoin as a preservative and even publicly asserted that the chemical was safe for use in hair products, the company only recently reformulated its TRESemmé Keratin Smooth shampoos to replace DMDM hydantoin with other preservatives, the case avers.

Given the litigation against Unilever, not to mention the flood of consumer “horror stories,” some of which are cited in the lawsuit, the defendants should have been well aware of “the high potential for toxicity or allergic reaction” caused by use of the TRESemmé Keratin Smooth products, the lawsuit charges. Nevertheless, the company has allegedly “failed and continues to fail” to warn consumers about possible reactions and has even attempted to downplay or conceal the plethora of consumer complaints.

“Unilever continues to this day to advise consumers that these Products are safe to use as directed, without providing any disclosure concerning the complaints of hair loss and with no warnings regarding the hair loss that may result from their continued use,” the complaint reads. “Indeed, despite Unilever’s knowledge and awareness of hundreds if not thousands of complaints of significant hair loss and breakage caused by the Products, Unilever continues to claim the use of DMDM hydantoin it [sic] is safe and permits them to be sold to this day — without providing consumers with any revised warnings or disclosures.”

According to the suit, the defendants’ “reckless indifference” has allowed Unilever to realize “sizeable profits” at the expense of consumers.

The plaintiff in the case, an Algonquin, Illinois resident, says she bought the TRESemmé Keratin products in February 2020 “because she wanted smooth hair.” Prior to using the products, the woman had never experienced hair loss or scalp irritation, according to the suit.

Despite following the directions on the products’ labels, the plaintiff noticed her hair began falling out “shortly after the first few uses,” the suit relays. Per the case, the woman’s hair became dry and brittle and broke off easily.

The plaintiff says she also experienced irritation, with her scalp becoming “very red and dry” after using the Keratin Smooth products. According to the suit, the irritation and itchiness would persist up to seven hours after the plaintiff used the shampoo.

The woman says she used the TRESemmé products for about two weeks and, after discarding them, no longer experienced hair loss and scalp irritation.

According to the case, the plaintiff would not have purchased the Keratin Smooth products had she known their “true nature.”

The lawsuit also proposes two other classes of those who purchased the products in California, Florida, Illinois, Massachusetts, Michigan, Minnesota, Missouri, New Jersey, New York, and Washington, and those who did so in Illinois.

There’s typically nothing you need to do to join a proposed class action when it’s first filed. If the case moves forward and settles, anyone affected should then be given an opportunity to claim whatever compensation the court deems just. Click here for more information about the process.

To keep up with class action news and updates, sign up for ClassAction.org’s newsletter here.