The Whirlpool Corporation joins KitchenAid, Inc. and Jenn-Air Corp. as the defendants in a proposed class action lawsuit that alleges the companies’ electric cooktops with glass cooking surfaces and touch controls can turn on by themselves while unattended, posing a serious fire hazard.

At particular issue in the 42-page complaint is that while Whirlpool voluntarily recalled the cooktops in August 2019, the recall is “entirely inadequate” in that, according to the case, it failed to sufficiently provide reasonable notice to consumers that the product poses a substantial safety hazard.

“Whirlpool has noticeably failed to account for the fact that purchasers of Whirlpool’s Defective Cooktops are at grave risk of personal injury and property damage, including, but not limited to, the destruction of their homes,” the lawsuit says, claiming the product suffers from, “at minimum,” a negligent design.

On August 28, 2019, Whirlpool Corporation announced the recall of roughly 26,300 electric glass cooktops sold in the United States under the Whirlpool, KitchenAid and Jenn-Air brands. The cooktops, made in radiant and downdraft radiant models, utilize touch controls with which users can variate heat settings, the case explains, and can be turned on simply by touching the “ON/OFF” control for the desired element.

The models subject to the recall were manufactured between December 2016 and July 2019 and sold online and at Lowe’s, Home Depot and Best Buy, among other retailers, from March 2017 through August 2019. Per the case, the retail price of a Whirlpool glass cooktop is in the neighborhood of $2,500, meaning more than $65.7 million worth of defective cooktops existed in the U.S. alone.

The recalled product can be seen below. 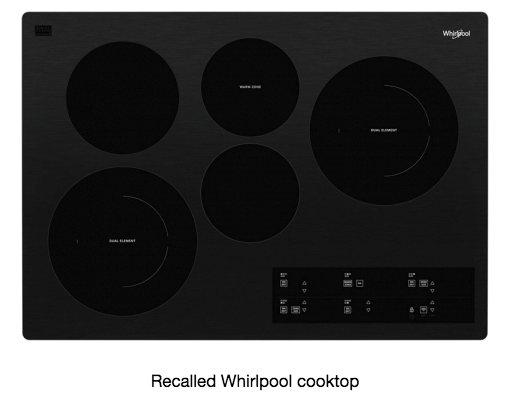 According to the Consumer Product Safety Commission (CPSC), the recall included the following models: 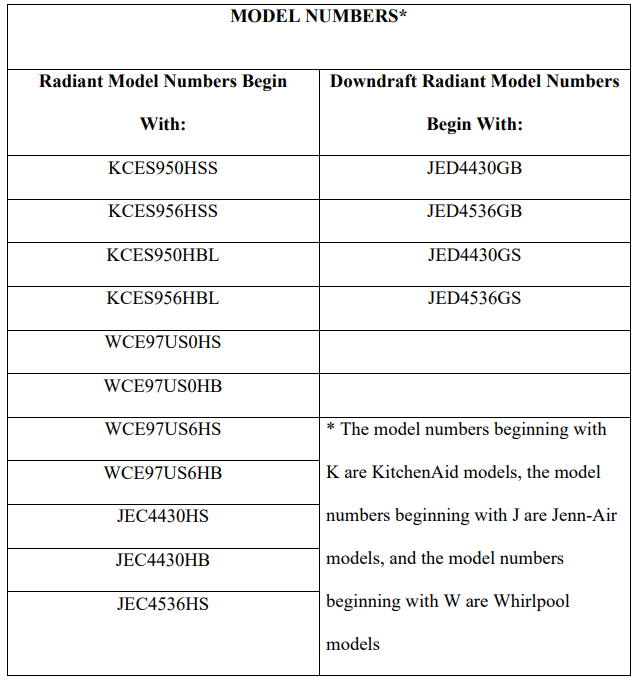 Whirlpool, according to the CPSC, received more than 130 incident reports concerning glass cooktops that turned on by themselves. A number of the reports, the CPSC says, involved heat damage to items close to the cooktops, and four reports involved items that caught fire. Two minor burn injuries have also been reported.

Following the recall, the case says, Whirlpool instructed consumers to turn off the glass cooktops at the circuit breaker when the appliances were not in use and to contact the company for replacements. Despite promising to do so, Whirlpool has failed to replace the faulty cooktops, the lawsuit alleges. The plaintiff, who claims he contacted Whirlpool numerous times in the hopes of securing a replacement, argues that proposed class members continue to pay out-of-pocket “in attempts to mitigate the safety concerns imposed” by the defendants’ failure to promptly replace the product.

Whirlpool “knew or should have known” of the risk its glass cooktops posed to consumers yet “chose to remain silent” and conceal the nature of the problem from the public while continuing to sell the product, the suit claims. In fact, after learning that its glass cooktops could self-start and catch fire, Whirlpool, rather than immediately warn consumers, instead prioritized its stock value and waited “weeks” before alerting the public, the lawsuit says.

The case goes on to claim that many consumers, to date, remain unaware that their Whirlpool-made glass cooktops are defective and pose an unreasonable risk of harm. Had consumers known of the defect with the glass cooktop, they would never have bought the product or would have paid significantly less for it, the plaintiff argues.

In essence, Whirlpool Corporation has deprived consumers of the benefit of their bargain by selling glass cooktops that are wholly unable to be used safely for their intended purpose, the suit says. The case adds that even if the proposed class members were able to use their glass cooktops, they would place themselves and others, not to mention their property, at a significant risk due to the fact that the product can supposedly turn on by itself and catch fire.

The lawsuit looks to cover a class of consumers nationwide who bought or otherwise acquired a glass cooking surface, radiant and downdraft radiant models, sold under the Whirlpool, KitchenAid or Jenn-Air brands for personal or household use. The complaint alleges violations of the Minnesota Unlawful Trade Practices Act, negligence and breach of implied warranty.