[Update – October 16, 2017 – A Miami Herald report published last Friday says Burger King has settled this lawsuit. The terms of the settlement dictate that any customer with a receipt showing the pricing difference between Croissan’wich orders will receive $5 from Burger King. Per Herald reporter David J. Neal, Burger King’s investigation of its buy-one-get-one promotion found that in some situations where a consumer used a buy-one-get-one coupon to order two Croissan’wiches without egg, cheese and/or meat (a “modified Croissan’wich”), the individual may have been charged the price of a single regularly priced Croissan’wich.]

As it turns out, sometimes you may not be able to have it your way—even if a coupon says otherwise.

How come I allegedly can’t have it my way?

The 35-page lawsuit alleges the fast food staple, rather than giving coupon-holding customers one free sausage, egg, and cheese sandwich with the purchase of a Croissan’wich at its standard price, instead charges unknowing consumers an inflated price for the first sandwich.

At issue, summarily, is that the math allegedly doesn’t add up with Burger King’s current BOGO promotion.

“When a consumer uses Burger King’s BOGO coupon, they are unknowingly forced to pay an inflated price for the first Croissan’wich they purchase in order to receive the second Croissain’wich for ‘free’,” the lawsuit alleges. "In other words, without any notice, Burger King charges a higher price for a Croissan’wich if a consumer presents a BOGO coupon at purchase.” 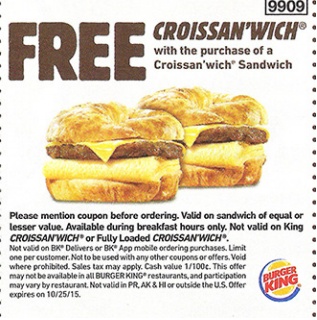 The lawsuit argues Burger King’s alleged faux-BOGO promotion is not only deceptive and unfair, but constitutes a breach of contract and implied covenant of good faith and fair dealing with consumers. Further, the alleged “BOGO scheme” also violates Maryland, Virginia, and Washington D.C. consumer protection laws, the complaint says.

“This is a simple case of consumer deception,” the case asserts.

Did the plaintiff have it her way?

According to the lawsuit, the plaintiff used Burger King’s BOGO coupons throughout April 2017 at locations in Maryland, Virginia and the District of Columbia, reasonably expecting to pay “the same regular price for two Croissan’wiches as she would for one.” Instead, the plaintiff was allegedly charged a higher price for two Croissan’wiches than what she would have paid to purchase a lone breakfast sandwich.

Additionally, the plaintiff’s counsel alleges in the lawsuit that it conducted its own investigation in Florida of Burger King’s allegedly fraudulent BOGO promotion. The attorneys claim in the lawsuit that Burger King, which operates more than 15,000 restaurants around the world, does not limit its BOGO “scheme” to just corporate locations in Maryland, Virginia, and the District of Columbia.

“Despite the fact that Burger King franchises many of its locations, the uniformity by which various franchises across the country charge inflated prices for BOGO purchases reflects a top-down policy of the Burger King parent company to deceive customers,” the case alleges. “Accordingly, Burger King’s nationwide scheme is stealing untold millions of dollars from hard-working Americans.”

Who does the lawsuit hope to include in its class?