A magistrate judge overseeing the case detailed on this page has signed off on a settlement reached by the plaintiff and Bank of America in May 2021.

In a June 28 order granting the parties’ motion for preliminary approval, U.S. Magistrate Judge Leda D. Wettre found that the agreement was “fair, reasonable, and adequate.”

Under the terms of the deal, Bank of America will automatically issue checks to members of the settlement class (defined below) from a $5,950,000 fund. Each individual, according to court documents, will receive a pro-rated share of the settlement fund based on the number of people in the settlement class and the amount of interest they paid between when their payment option of “amount due” became effective and when they changed it to “account balance” instead. The plaintiff estimates that each person will receive around 54 percent of the total interest they paid during that time frame, which the motion praises as an “exceptional result.”

Those covered by the deal include anyone in the U.S. who:

A final approval hearing has been scheduled for November 17, 2021.

More information about the deal can be found at the official settlement website, creditcardautopaysettlement.com.

The 22-page lawsuit out of New Jersey explains that most credit card issuers offer customers several options when setting up monthly automatic payments. The most costly option to the cardholder—and most profitable for the credit card issuer—is to pay the statement’s minimum amount due, the suit says. Selecting this payment option will allow the credit card issuer to automatically withdraw the minimum amount due on a customer’s most recent statement with the remaining balance carrying over to the next month while accruing interest, the complaint says.

The least profitable option for the card issuer, the case goes on to explain, is for the customer to pay the full statement balance reflected on the most recent billing statement, leaving no balance to carry over into the next month. Customers can also choose to pay a fixed amount each month regardless of the statement balance, the suit adds.

A step further, the complaint points out, American Express even offers a fourth option whereby a customer can pay the “Total Balance,” defined as the “full balance on your account.”

Unlike other credit card issuers, Bank of America includes an additional automatic payment option called “Amount Due,” the lawsuit says. According to the complaint, “Amount Due” is listed as the default payment option, followed by “Minimum Amount Due,” “Account Balance,” and “Fixed Amount.” 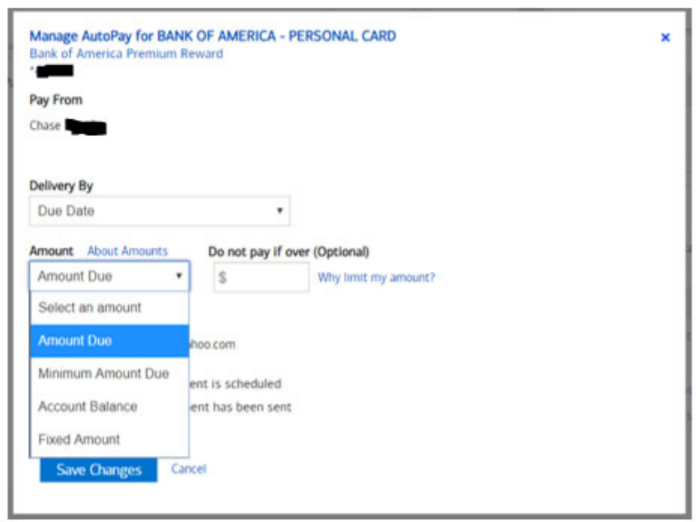 The lawsuit argues that customers, when presented with these four options, interpret “Amount Due” to mean the full balance on their most recent credit card statement, with “Account Balance” resembling American Express’s fourth option to pay the total account balance, i.e., the statement balance plus any additional purchases made after the statement date.

Moreover, a reasonable consumer would not expect the “Amount Due” to mean the minimum amount due given that option exists independently, the suit avers.

The case charges, however, that Bank of America’s “Amount Due” option means “the exact same thing” as “Minimum Amount Due.”

“Contrary to the expectations of reasonable consumers, selecting ‘Amount Due’ will cause Bank of America to withdraw only the minimum amount due—typically leaving a balance to carry over to the next month and accrue interest charges,” the complaint reads.

The lawsuit claims Bank of America intentionally added the duplicate option—as the first, default option, nonetheless—in order to trick consumers into believing they are paying their full account balance instead of only the minimum amount, thereby allowing the bank to reap profits via accrued interest. From the complaint:

“Cardholders who select ‘Amount Due,’ intending to choose an option that will pay off their entire credit card balance, instead end up paying only the minimum amount owed. As a result, their credit card debt grows, and they accrue the interest they were trying to avoid—to Bank of America’s benefit. There is no reason for Bank of America to offer both the ‘Amount Due’ and ‘Minimum Amount Due’ options other than to confuse cardholders and profit from their confusion.”

The lawsuit argues that Bank of America offers no clear explanation of the “Amount Due” option on its website or customers’ billing statements, which the plaintiff says further evidences the bank’s intention to mislead customers.

The suit looks to represent anyone with a Bank of America credit card who, within the applicable statute of limitations period, enabled automatic payments through the bank’s website and selected the “Amount Due” payment option.