A class action claims The Folger Coffee Company has misled consumers as to the amount of coffee that can be made from the contents of each of its “staple” canisters.

The Folger Coffee Company and the J.M. Smucker Company have been hit with a proposed class action in Illinois that claims Folgers ground coffee products produce less coffee than the number of servings represented on canisters.

According to the suit, the serving claim on Folgers coffee canisters—i.e., “MAKES UP TO 240 6 FL OZ CUPS”—amounts to an unlawful bait-and-switch scheme that causes consumers to spend more money “for less than the advertised amount of coffee they believe they are purchasing.”

The lawsuit looks to represent anyone who purchased a Folgers coffee product in Illinois within the applicable statute of limitations period.

The Folger Coffee Company has been hit with another proposed class action, this time in Florida, that claims the coffee grounds in Folgers canisters actually produce far fewer cups of coffee than their labels advertise.

The lawsuit looks to cover anyone in Florida who purchased a Folgers coffee product that advertised on the label a certain number of cups that the canister would purportedly produce.

A proposed class action claims The Folger Coffee Company has misled consumers as to the amount of coffee that can be made from the contents of each of its “staple” canisters.

Although the labels on Folgers coffee products state a purported cup yield—for example, “MAKES UP TO 210 6 FL OZ CUPS”—the lawsuit argues that there simply is not enough ground coffee in each canister to produce such. According to the case, the cup yield written on the front labels of Folgers coffee products is “completely arbitrary” and serves only to deceive consumers into paying more for a product that fails to live up to its advertised claims.

“In a practice that clearly offends reasonable consumer expectations, Defendant engages in a classic bait-and-switch scheme that causes unsuspecting consumers to spend more money for less than the advertised amount of coffee they believe they are purchasing,” the complaint states.

The lawsuit claims that if a consumer were to follow the directions printed on the back of each Folgers coffee label, i.e., using six ounces of water per one tablespoon of Folgers coffee, the amount of coffee produced would fall as many as 54 cups short of the advertised cup yield on the canister’s packaging.

The same applies for brewing coffee in bulk according to the defendant’s directions, the suit says, with canisters of ground coffee producing as many as 15 cups less than the amount stated on the front label. 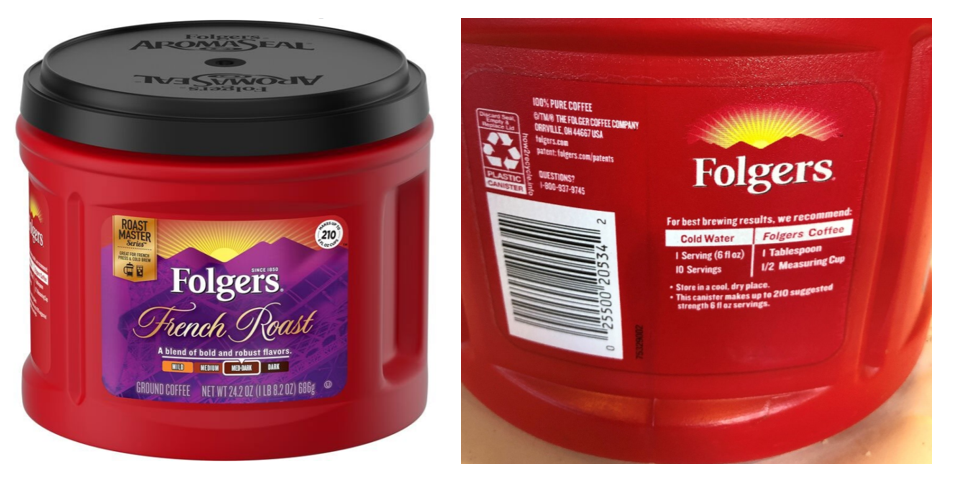 The lawsuit claims that Folgers “uniformly and systematically” misrepresents the amount of ground coffee in its products. Citing testing performed on more than a dozen Folgers coffee varieties, the suit alleges there is a consistent discrepancy between the advertised cup yield and the measured number of cups produced with the contents of a Folgers canister.

According to the suit, consumers reasonably expect that if they follow the defendant’s serving instructions, the coffee products will produce the advertised amount of coffee.

“However, they do not,” the complaint states, adding that “at no time” does the defendant ever inform consumers as to the “true number” of cups that can be produced if the product’s back-panel instructions are followed, much less that the actual amount of brewed coffee will not match the front label’s advertised number of servings.

The lawsuit claims the defendant’s allegedly deceptive advertising has enticed consumers into purchasing Folgers products “they would not have otherwise purchased.”

The suit seeks to represent anyone in California who, within the applicable statute of limitations, purchased a Folgers coffee product that advertised a number of coffee cups the product would purportedly produce and who has not received a refund or credit for the product.