A class action alleges the operator of the Surfside, Florida condo building that partially collapsed could have prevented the tragedy.

The official website for the litigation concerning the collapse of the Champlain Towers South condominium building is live and can be found here.

Contact information for the receiver for the Champlain Towers South Condominium Association can be found here.

The publication wrote that the deal, which Judge Hanzman called an “outstanding result” for survivors, was greenlit over the objections of some unit owners and some family members of those who died in the collapse. Per Law360, Judge Hanzman relayed that without a settlement, there would instead be likely years of litigation between victims who lost property and the families of wrongful death victims, during which time no one would be able to receive any money.

Judge Hanzman added that he would approve the settlement contingent upon the property selling for at least $120 million, Law360 noted.

A settlement has reportedly been reached between victims of the collapse of Surfside, Florida’s Champlain Towers South condominium and the condo association’s law firm and engineering firm, who inspected the building in 2018.

Legal publication Law360 reports that the victims’ negligence claims against Becker & Poliakoff, the condo association’s law firm, and Morabito Consultants Inc., its engineering firm, were able to be resolved through mediation.

Attorneys for the collapse victims did not disclose any details of the settlements but said documentation on the deals would be submitted with the court next week, Law360 writes.

A tentative settlement has been reached that would see $83 million go to those who lost property in the June 24, 2021 Champlain Towers South condominium collapse, Law360 reports.

The publication relays that attorneys for both sides agreed last week after extensive mediation to a deal that would send $50 million of the first $100 million recovered from insurance and a possible sale of the property to condo owners who lost their units but otherwise survived the collapse. Law360 says an additional $33 million of the second $100 million recovered would also be divided among 136 unit owners.

The proposed deal would resolve property loss claims, leaving only wrongful death claims in the litigation. Included in the tentative settlement is a release of any claims against unit owners, who under Florida law could be held liable for the acts and omissions of the condominium association should it be faced with judgments or damages in excess of its liability insurance coverage.

A proposed class action lawsuit alleges the operator of the Surfside, Florida condo building that partially collapsed this week could have prevented the tragedy had it exercised ordinary care and implemented needed structural improvements. The plaintiff, the owner and resident of a condo in the 12-story, 136-unit Champlain Towers South, alleges in the 16-page complaint that defendant Champlain Towers South Condominium Association, Inc. failed to secure and safeguard the lives and property of those who owned condos in the South Florida building and could have prevented the collapse had it addressed the need for certain improvements.

At the time of this post’s publication, four people are dead and 159 people remain missing as search and rescue teams continue their efforts, according to CNN.

The lawsuit claims the horrific collapse of two sections of the building at 1:30 a.m. on June 24 stemmed from the defendant’s failure to implement certain structural improvements for repair needs that, according to public statements made by the condo association’s attorney, Ken Direktor, “had been identified.” What followed the defendant’s “acts and omissions,” the complaint says, was “one of the most breathtaking frightening tragedies in the history of South Florida.”

The case charges the collapse of Champlain Towers South was “due to Defendant’s inadequate protection of both the safety of residents and visitors to the building,” including the plaintiff and proposed class members:

“Defendant disregarded the rights of Plaintiff and Class members by intentionally, willfully, recklessly, or negligently doing the following: failing to take adequate and reasonable measures to ensure the safety and protection of its residents and their property, failing to disclose to its residents and visitors that it did not have adequate safety measures in place to safeguard occupants of Champlain Towers South, failing to take steps to prevent the catastrophic collapse of the building, and failing to monitor the building and the activities that led to the collapse of the building, among other things.”

Per the lawsuit, the plaintiff and proposed class members suffered actual injury in the form of damages to and diminution in the value of their property as a result of the building collapse. The Champlain Towers South Condominium Association was bound by its by-laws, rules and regulations to maintain, repair and replace “[a]ll common elements and limited common elements” of the structure, including but not limited to all portions of the unit “contributing to the support of the building, which shall include, but not be limited to, the outside walls of the building, and load-bearing columns,” the complaint states. 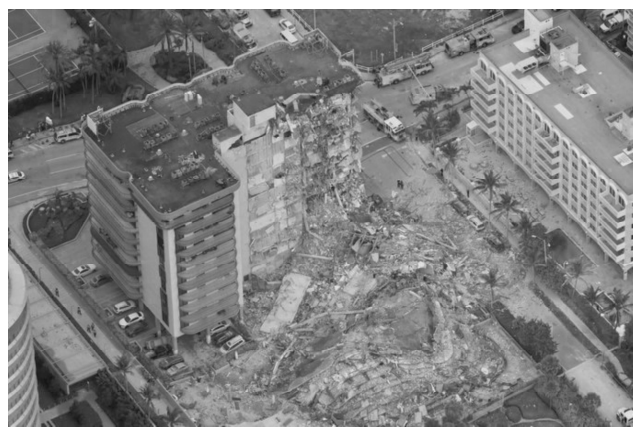 According to the lawsuit, the defendant, at all relevant times, was aware, or reasonably should have been aware, that the plaintiff’s and proposed class members’ lives were at risk “due to the lack of precautions taken at Champlain Towers South.”

In a statement, the plaintiff’s attorney said the tragedy was preventable, and that a lawsuit is necessary in order to preserve documents and records pertaining to the building and ensure an investigation is conducted.

The suit, filed in Miami-Dade County Circuit Court on June 24, just hours after the building’s partial collapse, looks to represent a proposed class of all owners of condominium units at the Champlain Towers South located at 8777 Collins Avenue, Surfside, Florida.