This Alert Affects:
Servicemembers who entered into financing agreements with Harris Jewelry, a company that sells jewelry specifically for military personnel and their families.
What’s Going On?
The New York Attorney General has sued Harris Jewelry claiming the company marked up its jewelry up to 10 times over wholesale value and tricked service members into signing finance agreements with excessive interest rates. Now, attorneys working with ClassAction.org are investigating whether a class action lawsuit can also be filed.

Thank you to everyone who contributed to this investigation. At this point, attorneys have what they need and are determining whether legal action is appropriate. They no longer need to hear from people about their experience with Harris Jewelry. Stay tuned to this page for updates. The information below is for reference only.

Attorneys working with ClassAction.org would like to speak to servicemembers who entered into financing agreements with Harris Jewelry, a company that sells jewelry specifically for military personnel and their families.

In October 2018, The New York Attorney General’s office filed a lawsuit against the company claiming it excessively marked up the price of its jewelry and tricked servicemembers into signing illegal, confusing and high-priced financing agreements.

In light of these allegations, attorneys working with ClassAction.org would like to speak to anyone who entered into a finance agreement with Harris Jewelry. They’re investigating whether a class action lawsuit can be filed in conjunction with the New York Attorney General’s lawsuit.

What Does the Lawsuit Say Exactly?

The lawsuit claims that Harris Jewelry engaged in “illegal, fraudulent, and deceptive” conduct when it entered into financing agreements with and sold jewelry to active duty servicemembers. Specifics on the suit’s allegations can be read below.

Harris’ Real Profits Come from Its Financing Contracts – Not Its Jewelry

The suit claims that while Harris purports to be a jewelry retailer, the company’s real profits come from the “Harris Program” financing contracts it extends to active duty servicemembers.

Harris Jewelry advertises the program as a way for service members to build up their credit so that they can finance future purchases such as cars. Harris Jewelry employees allegedly use a “presentation book” to sell the benefits of Harris financing and only mention jewelry in passing.

Once the servicemember agrees to use the Harris Program to improve or establish his or her credit, the salesperson will show him or her jewelry items and attempt to “sell” enough of the product to maximize the amount of credit the company can advance, the suit claims. The amount of credit, however, is not based on the servicemember’s credit score, outstanding debts or potential income, the suit says. Rather, the company allegedly bases the credit amount on the branch the servicemember is enlisted in, the amount of time he or she has left on his or her contract, and the “category” of the jewelry they purchased.

The suit claims that Harris only extends credit to those who have at least nine months left of service because the company expects “a higher likelihood of repayment on the contract when the consumer is still on active duty.” The payments, according to the suit, are collected from servicemembers every payday for a set length of time via a direct deduction from their paychecks or direct debit or charge to their bank account or credit card.

The lawsuit claims that between 90 and 95 percent of Harris Jewelry sales are financed through the Harris Program.

The lawsuit alleges that Harris Jewelry inflates the retail price of its products “dramatically more” than typical jewelry retailers. According to the suit, Harris charges six to seven – and sometimes 10 times – the wholesale cost of its items. This is a significant deviation from standard practice in the jewelry industry, the suit says, which is typically to only double the wholesale cost of an item or at most to triple the price should the store intend to run promotions on the item.

For instance, Harris sells a red, white and blue “infinity” pendant for $399.99. The lawsuit claims Harris purchased this item at wholesale for $45. The retail price, therefore, represents a nine-times increase over the wholesale cost of the pendant. The following is a chart from the lawsuit showing the inflation of other Harris Jewelry’s products: 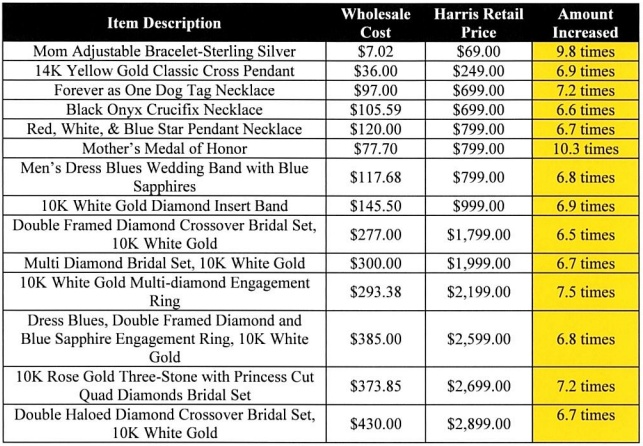 The alleged price inflation is further evidenced by the amount Harris Jewelry insures its shipments for, the suit claims.

It is “uniform policy,” the lawsuit says, for Harris to “insurance all shipments for $300.00, regardless of the contents of the shipment itself, despite the fact that the vast majority of Harris’s jewelry is priced in the thousands of dollars.”

Harris reportedly sells protection plans for its jewelry that are marketed as being “optional.” The lawsuit alleges, however, that some consumers are unaware that they’ve purchased a protection plan because the product is “added to a consumer’s retail installment contract as a routine practice without disclosure to the consumer.”

The suit claims that protection plans were sold on more than 90% of eligible jewelry purchases in 2015 and 2016.

For instance, the suit claims, a financing contract for Harris’ Mother’s Medal of Honor lists a principal cost of $974.31. This includes the price of the medal ($799), along with the cost of a protection plan, taxes and shipping and handling. With a 14.99% interest rate over a 10-month term, the suit says, the servicemember would end up paying $1,039.26. Once the excess markup and corresponding increase in the cost of the protection plan are “properly categorized” as financing fees, however, the actual APR on a contract for the Medal of Honor is 316%, according to the lawsuit.

Lastly, the lawsuit claims Harris has received numerous complaints from consumers about the quality of its jewelry.

The suit says the most common problems are:

With regard to the last issue, the suit claims some people had their jewelry repaired, only to have the gems fall out “again and again.”

How Could a Class Action Help?

If a class action is filed and is successful, servicemembers may be able to get back any extra money they paid out due to Harris Jewelry’s allegedly illegal and deceptive conduct. It could also change the way the company operates and prevent other people from being duped by Harris Jewelry’s marketing.