August 4, 2021 – Investigation Closed
Thank you to everyone who reached out to us in regard to their dressers. At this point, attorneys working with ClassAction.org have decided to close their investigation into this matter. This means they are no longer looking to speak with people who owned the dresser at issue.

For more information on the recall of the Ameriwood Mainstays dresser, visit the CPSC’s website here. If you have questions regarding your rights, please reach out to an attorney in your area. Most offer free consultations.

The information below was posted when the investigation began and remains for reference only. Our open list of investigations can be found here.

This Alert Affects:
People who own certain Mainstays dressers made by Ameriwood Home. A photo of the specific product can be seen below.
What’s the Problem?
The dressers were recalled for a tip-over risk in 2017; however, attorneys think the recall did little to fix the problem and want to see if a class action lawsuit could be filed. But first, they need to speak with people who own the dressers.
How Can a Class Action Help?
A class action lawsuit may be able to help people get back the money they spent on the dresser. The dressers retailed for about $60.

Attorneys working with ClassAction.org would like to speak to anyone who owns an Ameriwood Home Mainstays dresser.

In September 2017, some of these dressers were recalled for a tip-over risk. Now, attorneys think they may be able to get a class action lawsuit started to help consumers get a refund for this potentially dangerous product.

Tell Me More About the Dresser.

The dresser at issue is known as a “Mainstays chest of drawers” made by Ameriwood Home and looks like this: 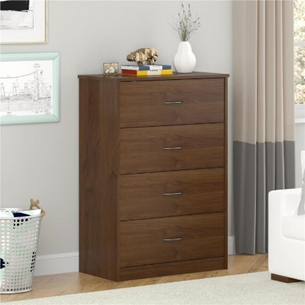 The four-drawer dressers came in several colors: black forest; alder; white; weathered oak; walnut; and ruby red. They were sold at Walmart and other retailers between April 2009 and May 2016 and cost about $60.

In September 2017, the Consumer Product Safety Commission recalled about 1.6 million of these dressers due to a high tip-over rate and entrapment hazard. The recall announcement called the dressers “unstable” and noted that if the units were not anchored to the wall, they could tip over and cause injury or death to children.

Ameriwood Home offered a free repair kit that included a device to anchor the affected dressers to the wall; however, it is believed that only around 50 people ever claimed their kits due to lack of awareness of the recall.

Why a Class Action Lawsuit?

Attorneys believe that Ameriwood Home customers didn’t get what they paid for when they bought one of the recalled dressers – that is, a safe dresser without a heightened tip-over risk. Further, while anchoring will prevent the tip-over risk, attorneys believe the manufacturer should take responsibility and improve their standards to protect both customers and children.