This Alert Affected:
People who used coupons at a Walmart.
What Happened?
In 2018, Walmart settled a class action lawsuit that claimed the retailer overcharged sales tax when consumers used coupons on their purchases. This settlement only covered purchases made at Pennsylvania stores. Attorneys working with ClassAction.org looked into whether similar cases could be filed in other states but ultimately decided not to pursue any legal action.
Can I Still File a Claim for the Pennsylvania Settlement?
Unfortunately, the deadline to submit a claim for a piece of the settlement has expired. Class members who did submit a valid claim received a gift card worth between $30 and $100.
What Can I Do Now?
If you still have concerns about your legal rights, we urge you to speak to an attorney in your area.
Any Other Advice?
You can scope out whether any other ongoing lawsuits and investigations affect you, here. Or, check out our settlements page for a list of resolved class actions that you might be a part of.

Note: The information below is for reference only. Attorneys working with ClassAction.org have decided to close their investigation into Walmart.

In 2013, Walmart was hit with a class action lawsuit in Pennyslvania that alleged it broke state law with the way it charged tax on purchases made with coupons.

What Was Walmart Accused Of?

Walmart was accused of charging too much sales tax on purchases made by consumers who used store or manufacturer coupons.

The class action lawsuit claimed that Walmart illegally failed to deduct the coupon amount before charging sales tax and printed receipts that were so confusing it would be hard for shoppers to even notice.

For instance, the plaintiff in the lawsuit claimed that he used a “buy one, get one free” coupon to purchase two cans of shaving gel, each valued at $2.97. Instead of charging sales tax on $2.97, which was the total amount the man was charged for his purchase, Walmart instead levied tax on the price of both cans ($5.94).

In September 2018, Walmart agreed to settle the suit. The settlement, however, only applied to consumers who made eligible purchases at Pennsylvania stores. Attorneys we work with looked into whether they could bring class action lawsuits in other states where Walmart may have violated sales tax laws, but ultimately chose not to move forward.

How Did the Class Action Help?

Even though Walmart denied it did anything wrong, the retailer agreed to pay a minimum of $21.5 million and a maximum of $45 million to settle the class action lawsuit. Class members received gift cards valued between $30 and $100, depending on the number of claims submitted, to be used at any Walmart or Sam’s Club stores. Additionally, the class representative was promised an award of up to $50,000 for his services, according to the settlement notice. 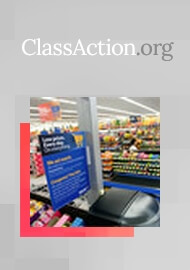