United States District Judge William Alsup tossed the case detailed on this page on October 29 on the grounds that the allegations are preempted by radio frequency radiation exposure regulations set by the Federal Communications Commission (FCC).

Ten plaintiffs have put their names on a proposed class action lawsuit in which they claim Apple’s iPhone and Samsung’s Galaxy smartphones emit levels of radiofrequency (RF) radiation higher than the maximum allowable limit, putting users at an increased risk of cancer and other negative health effects. The filing of the suit comes days after the publication of the findings of a Chicago Tribune investigation that prompted the Federal Communications Commission (FCC) to commit to testing for itself the allegedly dangerous levels of RF radiation emitted by certain Apple and Samsung smartphones.

Filed in California’s Northern District, the 44-page complaint explains that the type of radio waves cell phones use to communicate in-network are a form of electromagnetic radiation in the same frequency range used by televisions and microwaves. According to the case, this kind of radiation, more specifically called radiofrequency (RF) exposure, is represented by cell phone manufacturers as different from ionizing radiation, such as gamma rays and X-rays, that can strip electrons from atoms and cause significant physiological side effects.

The plaintiffs state in the lawsuit, however, that high levels of RF exposure can “heat biological tissue and cause harm.” According to the lawsuit, more than 150 scientists in 2015 appealed to the United Nations and World Health Organization (WHO) for “more protective RF exposure guidelines” and public education concerning the risks. In 2018, the case continues, the National Toxicology Program (NTP), a research arm within the National Institutes of Health of the U.S. Department of Health and Human Services, found a link between the radiofrequency radiation used by cell phones and “'clear evidence' of cancerous heart tumors in male rats.” The suit goes on to state that the WHO’s International Agency for Research on Cancer classified RF radiation from wireless devices as a “possible human carcinogen” based in part on the findings of the aforementioned NTP study and that gliomas and Schwann cell tumors in the brain near the ear were found in humans after long-term cell phone use.

According to the 44-page lawsuit, testing of Apple and Samsung’s smartphones has shown that the potential RF exposure for an individual carrying an iPhone or Galaxy in their pants or shirt pocket was over the exposure limit, sometimes “far exceeding” the threshold. The complaint cites testing conducted by RF Exposure Lab on behalf of the Chicago Tribune that measured 12 different cell phone models—three iPhone 7s, an iPhone X, an iPhone 8, an iPhone 8 Plus, a Galaxy S9, a Galaxy S8, a Galaxy J3, a Moto e5 Play, a Moto g6 Play and a Vivo 5 Mini—for RF radiation in accordance with FCC rules. Each phone was subject to two tests, one in which each was placed the same distance away from the outside of a tub containing liquid specially formulated to simulate the electrical properties of human body tissue and another for which the phone was placed two millimeters from the tub, a smaller distance “meant to reflect a phone being carried in a pants or shirt pocket.”

The lawsuit states that the iPhone and Galaxy models tested all emitted levels of RF radiation in excess of the legal exposure limit: 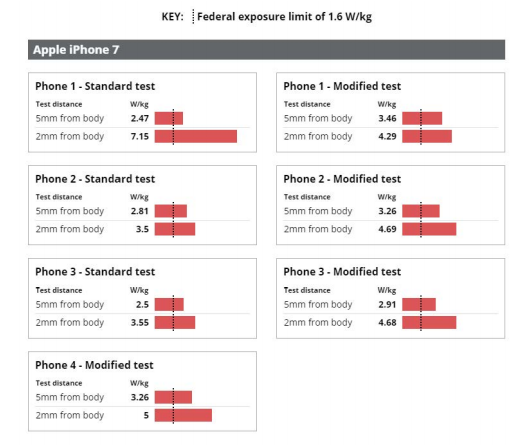 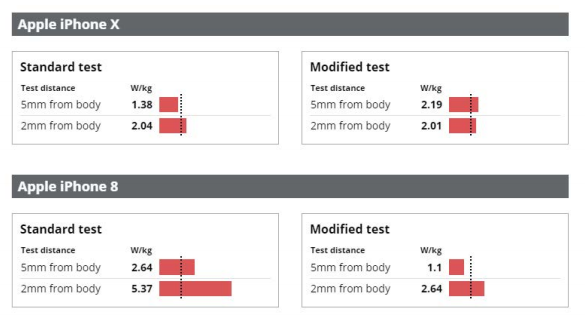 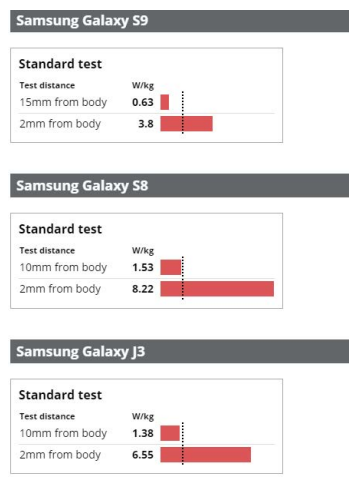 As the lawsuit tells it, Apple and Samsung intentionally misrepresented the safety of their smartphones by assuring consumers that the products were adequately tested and safe for use on and in close proximity to the human body at all times. Moreover, Apple and Samsung, the case alleges, failed to disclose to proposed class members that the levels of RF exposure presented by certain iPhone and Galaxy models “was far worse than a reasonable consumer would expect” given the price of the phones.

“Even when repeatedly faced with a wealth of warnings from scientists and the dangers associated with RF exposure from smartphones, Defendant continues to make no effort to protect or warn current or prospective owners of [iPhone and Galaxy smartphones],” the case says. “Rather, Defendant has turned a blind eye to these inconvenient truths, opting to double-down on statements that the [smartphones] are safe to use without restriction on placement.”