Consumers who own an Electrolux clothes dryer may be able to participate in a class action lawsuit against the company. It has been alleged that Electrolux designed defective clothes dryers which can catch fire, resulting in significant property damage.

If you own an Electrolux dryer, you may be entitled to compensation.

In late 2012, a judge dismissed an attempt by Electrolux to throw out the proposed class action lawsuit. Electrolux sought to dismiss all claims brought by the plaintiff, saying that she hadn’t suffered any actual injury and failed to adequately plead her claims which alleged that the company falsely represented the dryers to consumers. The judge disagreed with Electrolux’s argument, stating that the plaintiff’s dryer failed to operate normally and had to be serviced "beyond the norm." He found these allegations to be "significant," and added that while the appliance could dry clothes, it poses "too great a risk to make it fit to do so."

Allegedly, the Electrolux dryers present such a safety risk that they are rendered unfit for their intended use – to safely dry clothing. According to the suit, the dryers contain a defect which allows lint to collect in places which cannot be easily accessed by the consumer. Without warning, the consumer would have no reason to inspect this area, nor could they without taking the dryer apart, the lawsuit claims. The suit alleges that the dryers could catch fire if the accumulated lint ignites in the extreme heat of the machines.

Prior to the filing of the class action lawsuit, Electrolux faced legal action from State Farm Fire and Casualty Company. State Farm alleged that appliance manufacturer sold “unreasonably dangerous” and "defective" clothes dryers which caught fire and caused millions of dollars in damage to policyholders’ property. State Farm seeks to recover the $12 million it paid out to approximately 200 of its policyholders for fire-related damages, which ranged from several hundred dollars to more than $300,000.

These two lawsuits are not the first Electrolux has faced over an alleged fire risk in its dryers. The estate of a prominent fashion designer filed a suit against Electrolux in New York Federal Court, alleging that one of its Frigidaire Gallery Supreme Series dryers caught fire. The Electric Insurance Company is also representing two New Jersey consumers who claim that Electrolux is responsible for the $1 million in damage sustained after their dryer caught fire. In addition to the pending lawsuits, Electrolux also faces mounting online complaints from consumers who claimed that their dryers overheated or appeared to be burning clothes, among other problems.

Do You Own an Electrolux Dryer?

If so, you may be able to join the class action lawsuit against Electrolux to recover compensation for property damage and other losses. Class action lawsuits are filed on behalf of a large number of people who have suffered similar losses due to the actions or omissions of a company or organization. 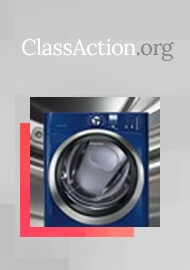