This Alert Affects
Those who purchased the $99 DNA "spit kit" from 23andMe.
Damages
Lawsuits accuse 23andMe of falsely advertising its DNA test kit because the company allegedly claimed that the product would tell users if they were prone to more than 240 health conditions and diseases; however, 23andMe never provided any scientific proof for its findings nor did it receive FDA premarket approval for the product.
Company(ies)
23andMe Inc.
Additional Details
Consumers who purchase the kit are instructed to spit into a saliva depository that is to be mailed back to the company for DNA testing. After "testing" the DNA, 23andMe sends the user a report revealing genetic characteristics that could put them at risk for diseases such as diabetes, coronary heart disease, or rheumatoid arthritis. The PGS test sells for $99.00 plus applicable taxes.
Date
On November 22, 2013, the FDA sent a letter to 23andMe warning that it would interfere with sales of the product if the company did not provide scientific evidence that the kit provides accurate medical reports – which the FDA had sought from 23andMe since 2009.

A putative class action filed against 23andMe accuses the company of using deceptive advertising to entice customers into purchasing its $99.00 Saliva Collection Kit/Personal Genome Services (PGS). According to the FDA, 23andMe has not presented any scientific evidence that the kit’s test results are accurate, nor has it gained premarket approval for the product to be used as a diagnostic device. Lawsuits allege that the kit’s test results are “meaningless” and that the company pools together the DNA samples to market the information to scientists. Some believe that the company is using the information to compile a DNA database at the expense of consumers, NBC News reported.

If you have purchased a 23andMe PGS kit, you may be able to take part in a class action lawsuit against the manufacturer. There are potentially hundreds of thousands of individuals who purchased the kit and may be entitled to compensation as a result of 23andMe’s deceptive advertising.

Why Is There a Class Action Lawsuit Being Filed Against 23andMe?

A class action was filed against 23andMe in November claiming that the manufacturer used false and misleading advertising to sell its DNA test kit and failed to provide any scientific data to support the product’s test results.

The lawsuit came just days after the U.S. Food and Drug Administration published a warning letter it sent to 23andMe. In its letter, the FDA claims to have been “diligently working to help [23andMe] comply with regulatory requirements” since July of 2009 to no avail. Since the PGS kit is used to diagnose diseases in the same manner as medical devices, 23andMe must receive premarket approval for the product. Without premarket approval, 23andMe is violating the Federal Food, Drug and Cosmetic Act (FCA), according to the agency. The FDA threatened to take legal action against the manufacturer if it did not immediately cease marketing for its PGS and provide the agency with data on the accuracy of the kit’s DNA testing.

According to court documents, the PGS test is designed to provide “health reports on 240+ conditions and traits” including inherited conditions, drug responses, and genetic markers for diseases such as diabetes or breast cancer. In previous communications between the FDA and 23andMe, the agency asked the manufacturer to provide analytical and clinical data to validate the PGS for its intended uses; however, 23andMe claimed it still had not finished the studies required by the FDA to gain approval for the product.

The FDA warned 23andMe that its PGS could provide false negative or false positive assessments, which may cause a “significant[ly] unreasonable risk of illness, injury, or death” for users who seek medical treatment based on their results.

What Can I Collect from a 23andMe Class Action?

Plaintiffs are demanding reimbursement for the money they spent on the PGS tests, as well as statutory and punitive damages to discourage any similar conduct. According to court documents, 23andMe collected at least $5 million in sales of its PGS kit from the tens of thousands of consumers who purchased the kit.

23andMe claims that its PGS kit can help users “take steps toward mitigating serious diseases” by using DNA samples to predict whether they are susceptible to diseases such as diabetes, coronary heart disease, and breast cancer. The PGS kit is also designed to provide information on how patients will respond to drugs and help users “plan for the future” by determining if their children may be at risk for certain medical conditions.

In a letter 23andMe sent to the FDA, the company claimed it had still not completed tests that would validate the PGS test and needed several additional months to complete studies involving the product’s labeling. The FDA’s warning letter to the manufacturer claimed that “to date, 23andMe has failed to provide adequate information to support a determination that the PGS is substantially equivalent to a legally marketed predicate for any of the uses for which [the company] is marketing it.”

If you purchased a PGS kit from 23andMe, you may be eligible to take part in a class action lawsuit against 23andMe to collect compensation for your losses. 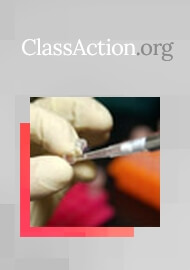